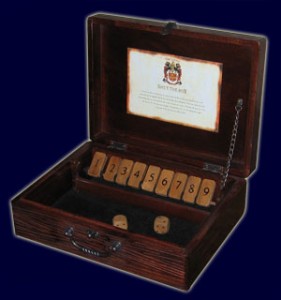 As anyone that’s played Front Porch Classic’s Dread Pirate knows, this is a company capable of making some gorgeous, heirloom quality games. But where Dread Pirate was full of gold and silver doubloons, lovely multi-colored jewels, and gorgeous metal ships, Shut-the-Box is surprisingly plain – a box with 9 numbered tiles mounted in it, and two wooden dice. It might cause one to say, “it’s very nice looking, but is it fun? And more importantly, what in the world does it have to do with pirates?”

Answering the second question first, while other board games are based on recreating the pirate fantasy, Shut-the-Box recreates the reality – this, in fact, is the very game many a pirate and sailor actually played during those long voyages. Whether drunk on the decks, or drunk in a tavern, some version of Shut-the-Box was likely close at hand.

So on to the second question – is it fun?

The beauty in Shut-the-Box is its remarkable simplicity. The entire instructions for playing are reprinted on the lid in a single paragraph:

“A favorite of sailors and fisherman for centuries, Shut the Box has also been played for years in the merry olde pubs of England. Roll the dice and lay down any combinations of tiles that match your roll. Keep rolling; when you can’t match the tiles to your roll your turn is over. If the tiles add up to six or less, roll only one die. Low score wins the game. You determine your score by reading left to right. Lay down all the tiles and you’ve Shut-theBox!”

With your first roll, you’ll likely have a puzzled look on your face, “OK, I guess I’ll try it.” With your third roll you’ll start to get into the swing of things, and by your fourth roll you’ll likely be playfully cursing the dice to the shouts of your mates as you all order another round. And then you’ll challenge them to another game. It’s that addictive, and that fun.

Shut-the-Box isn’t meant for a a quiet evening with the family. This is a social game for parties – the rowdier the better.