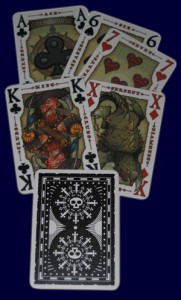 Pegleg Pete’s Deck of Royal Rogues is a proper deck of cards – four suits, two jokers… the whole shabang. It was designed from the ground up, rather than from a normal deck with pirate images superimposed here and there – the suits are all the familiar clubs, spades, and whatnot – but rendered anew with a piratey flair. The face cards are all mirror imaged from top to bottom, just like a traditional deck, but instead of the line-drawn kings and queen, it’s skallywaggs and cutthroats ranging in emotion from amused to bloodthirsty.

One of my favorite aspects of the art in the facecards is the personality. Not only does each pirate clearly have his or her own special look and characteristics, but a general mood is played out consistently within each of the independent suits. Spades are clearly the angry brutes of the lot, while Hearts appear somewhat soft and naive. Clubs and Diamonds play more to the charming-rogue middle-ground, although Diamonds are my definite favorite – the Jack and King look like the most fun to share in a round of rum, while the Diamond Queen is certainly the hottie of the deck.

In other hands, a deck of this sort might be reduced to a novelty item – fun images that lack the necesities for full game play. But the designers of Pegleg Pete’s not only ensured these cards were printed on high quality, properly waxed stock, but they made the remarkable effort of preserving many of standard playing cards’ time-honored traditions. The Jacks of Spades and Hearts remain in profile – thereby retaining their “one-eyed Jack status.” The King of Diamonds too remains one-eyed, although for him by grace of an eyepatch rather than head position. Furthermore, the Jack of Diamonds is very much a “laughing jack” and the King of Hearts is holding his sword in a proper “Suicide King” fashion. For the fetishist-at-heart, the Queen of Spades could be considered a “Bedpost Queen,” but by virtue of a flogger rather than a scepter. The only significant deviation I noted, in fact, was that the King of Diamonds no longer weilds his axe – this is instead the duty of the King of Spades. In short, die-hard poker fans should be able to seamlessly merge from their boring normal deck to Pegleg Pete’s without compromising any of their beloved house-rules regarding “One Eyed Jacks and Suicide Kings.”

In addition to making a high quality, fully functioning deck of cards, Pegleg Pete’s Deck also has thrown in four “serpent” cards, marked with an X rather than a value in the corner – each featuring a seamonster and a suit. The deck instructions invite gamers to come up with their own ways to utilize these cards ingame, and to submit ideas to their official website. It’s an intriguing addition, and one that will no doubt result in all sorts of fun new house rules (with luck, many of them resulting in the coerced consumption of rum.)

Lastly, Pegleg Pete’s Deck took that one final step to make itself truly complete, and is available with two back colors – Black Powder or Blood Red. So for anyone playing games that require seperate back colors, or simply for those who prefer one color to the other – Pete’s got ya covered.

I love these cards – it’s just that simple. It’s a proper pirate deck from stem to stern, and is the definitive product of remarkable creativity and attention-to-detail. Every pirate should own at least a few decks.