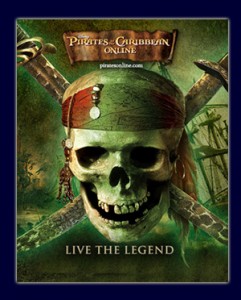 Disney’s Pirates of the Caribbean Online is a relatively young MMO – it’s only been live for a few months and is still growing and developing to best suit the desires of its players. In it, you create a pirate character – male or female – and customize their look to suit your tastes. The characters are a little cartoony, with the menfolk being rather burely and the girls leaning towards the cutesy, but this works well enough considering that the game itself is a bit fantastic and cartoony, rather than attempting to mimick reality outright.

Early game play is carefully guided by local non-player townsfolk, including some memorable faces from the Pirates of the Caribbean movies. Initial missions help you earn and learn the arts of cutlass, sailing, cannons, and pistols. It’s not long before the gameplay frees up, at which point you can continue on the main storyline quests (which get increasingly more difficult), but can also engage in ingame “extracurricular” activities to expand your skills and wealth. Things such as sailing and gambling can be done between yourself and ingame characters, but grow much more rewarding (and more fun) when you work alongside other players – real people you can interract with, learn from, chat with, etc. What you can’t do, noteably, is stab them and steal their money. This is a Disney game, after all, and Disney has made a great effort in keeping this game fun and safe for all, without sacrificing the piratey feel. There’s plenty of fighting, mind you, but you’re not allowed to shoot other humans (real or ingame), and cutlass attacks to foes merely result in the enemy falling down and dissappearing – no bloodshed involved. Of course, if the enemy bests you instead, you fall down and land in prison, being none the worse for wear except being “groggy” for a while, resulting in slowed reaction and health.

Pirates of the Caribbean Online is a very fun game, especially for newcomers to the MMO genre – or for folks who just don’t have the time to invest in a more involved MMO such as Pirates of the Burning Sea. It has surprisingly low hardware requirements compared to other MMOs, but PotC Online’s strength is also its curse – the simplicity of gameplay and missions makes it easy for all ages to enjoy, and doesn’t much penalize those who’s real world time commitments only allow them to play in small doses. But more mature players who want a full emmersion experience may quickly grow bored – the world is small, consisting of only four real cities, and a dozen or so smaller locations. Also, missions can tend to get very repetative, with countless errand-boy style challenges that bear little that’s new from previously completed goals (if defeating 5 skeletons is fun for a 2nd level player, defeating 50 isn’t necessarily anything new for a 20th level.)

PotC Online’s weakness aside, the game remains fun and charming. If missions get old, there is still much to be said for logging on after a hard day at work and meeting your friends to shoot cannons at the Navy for a couple of hours. And the game developers are clearly working to expand the game’s variety and playability – new clothing, haircuts, and tattoos were just added as ingame features (previously you were stuck with the look you chose at the beginning), and interviews have implied that new locations and missions are currently in the works.

2 thoughts on “Review: Pirates of the Caribbean Online”