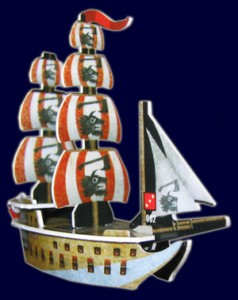 That I’m only just now reviewing the Pirates Constructable Strategy Games (CSG) is just shameful. Not only has it been out for some years now, but what’s more, I’ve been picking up their ships from Walgreens since the beginning. I’d never actually played the game mind you, but grabbing a pack now and again and assembling the ships to display on my bookshelf was enough to give me a small thrill.

So there you have it – a game you don’t need to actually play to enjoy. But I can’t take the sole blame for not fully appreciating the Pirates CSG. Even their own publicity material admits to being unprepared for their warm reception amongst consumers – their initial game release, planned as a two year run – actually sold out a month BEFORE the official release. And their various themed series’ (Pirates of the Crimson Coast, Pirates of the Frozen North, Pirates of the Ocean’s Edge, etc. etc.) have left many at a loss to determine what to actually call the overall game (“That Pirate Game” seems to be popular, again according to publicity materials.)

Long story short, the folks behind the Pirates CSG have long been making a highly nifty product, cranking out thousands of neat little ships that are loads of fun. And now they also seem to be regrouping and pulling it all together properly. Retitling the entire game as “Pirates of the Cursed Seas”, and even coining the new term “Pocketmodel”, they seem well positioned to usher in the next phase of mini-pirate sea battles that many a scalliwag should enjoy.

For those unfamiliar, the basics of Pirates of the Cursed Seas are very simple. Even a single booster pack (generally about $3.99) is enough for a short game, as it will always feature at least two main pocketmodels. Generally this means two ships, although it may instead include a giant sea creature from time to time. The ships and creatures are easily assembled, popping cleanly from their plastic card frames and fitting together with little effort. The results – the large ships in particular – are rather amazing. Full sails and flags, rows of cannons, national ensignia, even unique paint jobs on the hulls all contribute to some of the coolest (and cutest) warships you’ll ever see (this is a big part of why so many of them grace my bookshelves.) Honestly, my only complaint is that as the series expands to include more factions (vikings, seamonsters, the French) it gets harder and harder to get an acutal PIRATE ship in your deck. But, that’s why commandeering was invented 😛

Basic play is simple – ship stats such as hull strength, speed, and special abilities are listed on the ships’ cards. Additional special abilities can be found by adding crewmembers (also found within the packs randomely.) The rules are really quite straightforward, and you can play a short game almost instantly. In a very few minutes you’ll be maneuvering your ships around each other, and blasting masts away like a veteran. But I don’t think Pirates of the Cursed Seas’ true strength lies in short, small games…

As modern pirate enthusiasts, it can sometimes be a challenge to find ways to emmerse ourselves in this subject for which we feel so passionate. Few of us own ships, and fewer still can legally fire flintlocks off our back porch each weekend. Pirate online games are slowly on the rise, but this can be cold and distant at times. And getting all garbed up to go drinking with your crew… it’s not always adviseable, particularly in towns that have a low tolerance for the unnusual. With so few options available, imagine this solution:

YOU, a commodore. Commanding – not a ship, but a FLEET. Maybe two fleets even! At your beck and call are scores of skiffs, schooners, galleons and frigates. Vikings, pirates, privateers all at your disposal, with even a giant squid or two just to add some variety. You and your mates can gather around the table and turn it into a vast ocean – and then proceed to blast the bejeezus out of each other. You may not feel the salt air on your face, but the twin tastes of victory and defeat should be no less sweet or bitter, respectively.

In short, this is a game that I envision making an outstanding hobby. It’s easy to grab a quick booster pack when you visit the corner store, and developing new strategies for your fleet could easily be a time consuming habit. Anyone seeking an inexpensive, reasonably safe and wholesome way of enjoying high-seas maraudery with thier mates should take a serious look at Pirates of the Cursed Seas.

1 thought on “Review: Pirates of the Cursed Seas CSG”