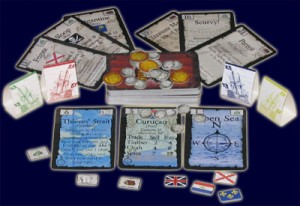 Plunder is a fantastic game the whole family can enjoy (so long as there’s only four of you.) It captures all the best things piracy has to offer – pillaging, sailing, buried treasure, tavern brawls – while at the same time remaining portable enough to take nearly everywhere.

The game-set itself is made of very durable materials – the coin and booty tokens are heavy-duty cardboard, and the cards are rigid and glossy. It’s all compactly packaged in a surprisingly solid cardboard box shaped like a small treasure chest that I’m sure will hold up for many years. Everything is decorated with properly nautical/piratey artwork that gives that perfect feeling for an evening of merry cut-throatery.

Plunder is a card and token style game, completely forgoing the common elements of dice or a game board. So without a board, where do you play? That’s the neat bit – players explore and build the field while they go, using sea and island cards to recreate the Caribbean with each new game. Cards are also used to represent ships, towns, and a whole series of major events (wars, peace treaties, mermaid attacks, etc.) Players can utilize cards against each other or to their own benefit as they to seek trade and pillage their way to being the first to reach sixty silver pieces.

By the above description, the game sounds simple and straightforward, but it bears mention that there’s really a pretty solid learning curve. Upon first attempting to play, my own family and I felt a little swamped trying to figure out the rules. There were rules for ship-to-ship combat, rules for gaining a Letter of Marque, rules for exploring and trading, and rules for starting over if your ship should sink. It was a bit overwhelming, and required some definite effort and patience to wade through. But we stuck with it, and soon found the rules became a bit more instinctual, and gameplay began to feel much more natural. By the end we were having a genuinely great time, and were looking forward to playing again.

All told, I’d say that Plunder would be a fine edition to most any pirate enthusiast’s collection. So long as you’re willing to be patient the first few goes (or better yet, invite a Plunder veteran over for dinner to show you how it’s done,) it’s sure to provide countless hours of entertainment. What’s more, it’s set up in a highly modular fashion, so once you’ve gotten your feet wet you can feel free to develop countless “house rules” to better tailor the game to your own preferences. There’s already a second set of rules out there, in fact – you can view them on the Plunder Fan Club (hey, there’s a Plunder Fan Club – that alone should tell you this is a game worth checking out 🙂