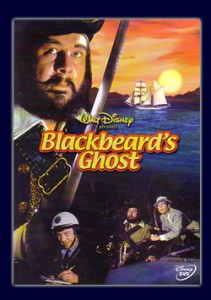 In the 1968 film Blackbeard’s Ghost, we’re introduced to a somewhat softer, more rotund variant of the dread captain than we’re given to expect, but one that’s still as rumswilling and swaggerly as any before or since. The plot, in essence, is the ghost of Blackbeard discovers that he can be seen by only one person, that being the new track coach of the local college. Together, they get on each others’ nerves while trying to find a way to save Blackbeard’s descendents (a troupe of little old ladies who’ve turned his ship into a touristy bed&breakfast) from a bank forclosure. All told, it’s really pretty typical 60’s Disney fair – relatively tame and lighthearted. In this way Blackbeard’s Ghost is clearly a dated movie – much of the humor is simplistic, and the gags relatively predictable. But while this film hails from a more innocent age, it’s also unburdened by modern political correctness, thus freeing Blackbeard to be even more rum-obsessed than Jack Sparrow could ever dream. Sometimes this freedom goes to strange extremes. I didn’t know whether to laugh or cry as Blackbeard misfires an automatic pistol in every direction around him – a scene that’s meant to be comical, but I couldn’t help but see this as a disaster in the making.

Blackbeard’s Ghost is at its best when Blackbeard is present – it can drag in his absence, although his appearances and dissapperances can lead to some decent comedy (the coach yelling at Blackbeard to “stay away from his boys”, for example, which to all observers [who can’t see the ghost] appears to be a rant at the cheerleading squad.) This film also features some interesting moral shifts – cheating in a bet, for example, is wrong – EXCEPT in cases where little old ladies might benefit, it would seem.

Blackbeard’s Ghost is not great cinema – rather it’s a perfect example of the 60’s Disney style seen in the likes of Escape to Witch Mountain and The Apple Dumpling Gang. But unlike those other films, this one features a rum-guzzling pirate ghost, which in my book gives it a clear advantage 😉