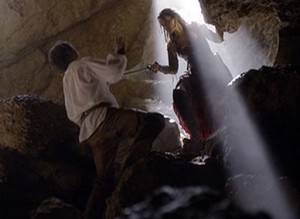 BUT, that doesn’t mean this show was great, exactly. It would have been great – had it been broadcast in 1985. Crusoe’s gadgetry seems straight out of MacGuyver or the A-Team, especially when Crusoe and Friday start prepping for an upcoming invasion – I could hear the A-Team soundtrack in my head the whole time.

Gadgetry is great and all, but I couldn’t get around the surprising complexity of things. For crossing a chasm, for example, Crusoe had constructed a giant hamster-wheel that suspended betweent two ropes. Why not a bridge? Why not a freaking bridge? Simple, effective, and certainly safer than some bizarro contraption. But this is Crusoe, mind you – the man who, when most would construct a simple fort and watchtower, instead built an entire Ewok village in the treetops. It bodes far more of fantasy than historical action-adventure, but perhaps the AT-ATs will strike in a future episode.

The story is told two-fold, using frequent flashbacks in the traditon of Lost. Crusoe’s past is revealed piecemeal, with segments from his childhood and adult life alike – but nothing that yet paints a complete picture. Again like Lost, it’s quite clear that there isn’t enough story to truly flesh out an ongoing storyline, so NBC instead gives us tiny crumbs in an effort to milk things out as long as possible while distracting us with smaller, less meaningful mini-plots for the current episode. But unlike Lost, I didn’t find myself much caring what the “big picture” was, and found these flashbacks distracting. Unlikely gadgetry and cliche acting aside, the present mini-adventure was far more entertaining. 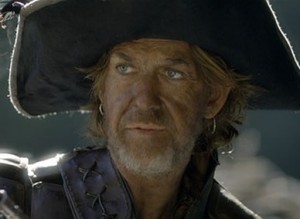 Speaking of which, I guess I should talk about what actually happens in this episode – in a word, PIRATES. Call it a classic, call it an over-used dud, but nothing is more piratey than randomly showing up on an island (in a longboat, mind you – calling to question whether this remote island is actually remote at all) with a treasure map. Initially the pirates are pretty obnoxious, but the worst of them are killed off fairly early on, and the remainder throughout the episode. This gives us more time to appreciate the two decent pirates, Captain Lynch and Judy, being the spunky lady pirate of the bunch. Lynch is actually some kind of all right – the quiet, deadpan delivery of his lines requires close attention, but he has his amusing bouts of irony, and even seems aware when he strikes a cliche moment, thereby twisting it into something a tad more interesting. Judy is also not too bad – I first came to like her when she hit Crusoe. Hard. Dirty, crass, and not remotely lady-like, she bore herself as a pirate lass should while remaining a decent catch at the same time – not always the easiest balance to achieve.

As always, I won’t overly reveal the plot. The story continues, Crusoe fights for his freedom from pirate capture, and then goes on to develop his love of gadgetry to such a degree as to defy physics itself – first by heating a ramrod to red-hot in only a few moments over a simple cooking fire, and then by firing said ramrod from his musket as though it were a speargun – with perfect accuracy, mind you. It’s these such moments that make me worry the show is about 20 years too late. Or worse yet, perhaps it’s 40 years too late, because it’s difficult to imagine how this show will continue forth with new adventures and characters each week without the audience wondering how our heroes can exist at the apparent Union Station of the island world without ever mustering passage home.

Aye, the Gilligan’s Island comparisons are sure to strike. So I’ll go first – Robinson Crusoe is the engineering genius that can’t build a raft (the Professor). Friday, being the skinny yet competent sidekick is an unholy merger of the Skipper and Gilligan (we’ll watch to see if he starts smacking himself with his own hat.) Judy could serve as Ginger, while Robinson Crusoe’s wife – only revealed in flashbacks and so bland I didn’t bother to mention her in this review – will serve nicely as Mary Ann.