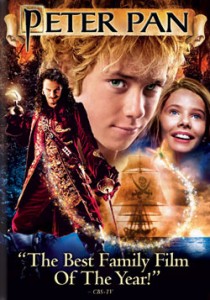 It’s a shame this film did so poorly in theaters. I’m sure this was due in no small part to the hype of adolescent sexual undercurrents, which is both unfortunate and unfounded. The only sexual currents in this film are those you bring yourself – this is a film about a struggle to cling to childhood, a resistance to growing up. And in this struggle we have two opponents – on the one side is Peter Pan, the boy that revels in childhood and wants nothing more than to hear stories and play games. And on the other side is Captain Hook, an adult stagnated, surrounded by a crew of intellectual infants and discontent in the lack of any meaning or satisfaction in his own life. And between them both is Wendy – a young girl on the brink of becoming a woman, not yet ready to leave childhood behind, but at the same time anticipating the new adventures that come with growing up. It’s sad that a few vocal lopers chose to see Wendy’s relationships with Pan and Hook as metephorically sexual. It’s not about sex, it’s about choosing between toys and bills, between being the cared-for or the care-giver. It’s about finding that time in your life when you realize it’s time to realize you’re no longer a child, and to start behaving accordingly (but not too soon.)

The film itself is beautiful. Neverland is protrayed believably yet fantastically. Wendy is performed with remarkable skill for such a young girl, and while Tinkerbell and Peter can both be somewhat annoying (and Peter, for that matter, somewhat poorly acted at times,) it’s all made up for by one shining feature: Captain Hook.

To be the first actor to portray a post Jack Sparrow big-screen pirate can’t be an enviable position, but Jason Isaacs does an unbelievable job. Truly the anti-jack, Hook is cruel, aristocratic, and tormented. He dresses like a velvet dandy and delights in the suffering of others even as he wallows in his own, one-handed misery. His sadistic nature is both comical and frightening, and his mannerisms downright chilling. With this performance, Isaacs has truly claimed and defined the role of Captain Hook, setting it right up there with Depp’s Jack Sparrow and Matthau’s Captain Redd.

Rent it – buy it. The DVD’s special features are rot, but the movie is magic and, in case I haven’t been clear, Captain Hook is brilliant.