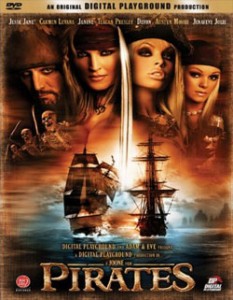 It’s important to recognize that this is an edited adult film, as without this knowledge you might be perplexed at how readily the characters get “snuggly” with each other, even in the most unlikely of circumstances (inside a burning barn, for example.) These scenes don’t get terribly graphic – I’ve seen much more explicit in any number of mainstream movies, although rarely in such frequency. Many of the scenes, in fact, are cut short before they’ve even properly begun. That said, this still isn’t a film to share with your 13 year old kids, as sexual context is there in abundance, as are brief images of writhing bodies, and more than a few naked breasts.

The story begins with the young Spaniard Manuel and his new bride aboard a ship bound for the Caribbean. They do their thing (briefly – this is edited, mind you) and then find themselves boarded by pirates (literally, that’s not sexual innuendo.) Isabella is wastefully tossed overboard, and Manuel is taken by the pirates Victor Stagnetti and Serena. Stagnetti makes for a perfectly hideous pirate, complete with mismatched eyes and stringly beard. He delivers his sinister lines with a multisyllablic gusto that is a joy to watch. Serena, for that matter, is also a joy to watch, although for entirely different reasons. She is easily the most gorgeous pirate chick I’ve yet to see on screen. Hardly historically accurate, I’ll grant, but her blonde dreads, red corset, and “badass” attitude leave no doubt that she could wipe the walls with Keira Knightly and Geena Davis combined, and look good doing it. But I digress…

Manuel is carted off by pirates, and Isabella is eventually fished up by the crew of one Captain Edward Reynolds. Reynolds is a righteous – yet inexperienced – pirate hunter. His enthusiasm for his work is only matched by his lovely first mate Jules’ enthusiasm for keeping the crew’s morale up, using techniques that elude him (he can only conclude she leads them in bible study, based on the cries of “oh god oh god oh god!” that so often reverberate from her cabin.) The role of Reynolds is performed with even more gusto than Stagnetti, and every phrase uttered by this virtuous-yet-niave captain is a gem. Time and again he confidently grins and says, “I’m hunting for pirates,” with the most bemused, self-satisfied emphasis on the word “pirates” imaginable. Hilarious, and disturbingly endearing. 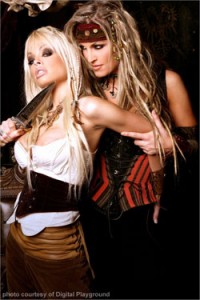 Reynolds, Jules, and Isabella scour the Caribbean in pursuit of Stagnetti and Serena in an effort to save Manuel. The journey takes them through a pirate town (complete with brothels, bachelor parties, and tavern backrooms – all of which are put to good use), and eventually leads our heroes to an island full of Aztec ruins (complete with an army of reanimated skeletal warriors – which are not put to “good use” – it’s not THAT kind of adult film.)

I won’t spoil the ending – let’s just say the good guys win, and reward each other in the manner to which they’ve all become accustomed. There is a ship battle, of course, and while the CGI animation is hardly the seamless illusion found in Pirates of the Caribbean, it does the job quite nicely – as do the CGI effects used in creating the skeletal army. But special effects aren’t why you want to watch this. And being as it’s the R-rated version, you’re not watching it for the sex, either. So the burning question remains – is there any point in watching an edited porno?

In this case, absolutely. Stagnetti and Reynolds both dish out countless hilarious moments, and clearly take great joy in hamming it up for the camera. The women don’t have as much to work with from a spoken perspective, but all are quite easy on the eyes (although I hope you like blondes, as they outnumber the one brunette from a 6 to 1 ratio.) The costumes are remarkably good, and the settings and effects surpass anything you would ever expect from a film of this genre. All told, it’s just plain fun, and well worth checking out.

5 thoughts on “Review: Pirates – A Joone Film (adults only)”