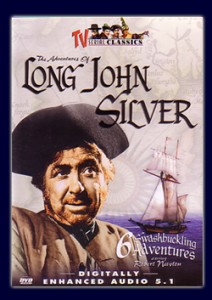 With this in mind, one might expect the television series “The Adventures of Long John Silver” – all six episodes starring Robert Newton in his signature role – to be a true classic gem. And for Newton’s fans, it may well be. Each episode prominently features Newton retackling his interpretation of Silver with every bit of gusto he can muster – and this makes these shows worth watching. But each episode also features dreadfully predictable writing, cliche plot points (Long John saves the orphan’s Christmas??? Crikey!), and many scenes that are downright painful (The not-so-attractive Miss Purity flirting heavily with an even less attractive one-eared pirate is difficult to bear, to say the least.)

Jim Hawkins – as is often the case – is portrayed as an unimpressive “every boy”, rather than the extraordinary young man he should be. Silver’s first mate “Patch”, who – you guessed it – wears an eyepatch, sports a hairstyle so dated and odd it must be seen to be believed, and not one of the stories boasts anything truly memorable. BUT, it’s all ripe with “arrrs”, pirate jargon, and bloodless bloodshed, which for hardcore pirate fans might be just enough to keep this somewhat enjoyable in small doses.

1 thought on “Review: The Adventures of Long John Silver”