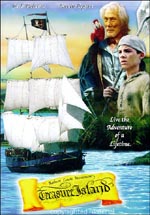 Not quite bad enough to be a complete mockery, but not terribly good, and the filmmakers made some very strange choices in the creation of this film. Most noteworthy is their departure from any faithfulness to the book by having the officers of the Hispaniola betray Jim, thus forcing him to join the pirates. Now, I’m all for trying new things, but it just felt awfully contrived. The Captain’s character especially may as well have been written by a twelve-year-old, right down to when he grabs Long John’s crutch and throws it out of reach like a playground bully. And rewriting the beginning to attribute Long John’s wooden leg, Pew’s blindness, and Black Dog’s scars all to a single fateful day may have looked good in script, but struck me as dopey.

This film has numerous other details that are all too easy to pick apart: Why doesn’t Ben Gunn have a beard (three years on an island usually results in more than a five o’clock shadow)? Why doesn’t Long John, a life-long pirate, know a damned thing about sailing? And why have what should have been a four second chase scene between Hawkins and Black Dog seemingly last half an hour, especially when it wasn’t remotely interesting or funny?