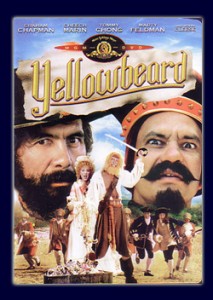 The film follows the exploits of Yellowbeard the pirate, escaping prison after 20 years of incarceration. He is essentially the human embodiment of the Muppets’ character Animal, as he glares out from a face that’s all teeth and wild hair, and spends his time killing, raping (to which the women only seem to marginally object), and – if there’s still time – seeking his long lost treasure. To do so he begrudgingly enlists the aid of his son, who he’d conceived the night before his arrest 20 years prior, as well as the additional aid of Dr. Gilpen and Lord Percy Lambourn (played by Peter Cook, who portrays the clueless drunk with astounding genius.) They’re pursued by the British Navy and government agents (particularly a Blind Pew, a sightless spy with preternatural hearing.)

The piratey exploits are filled to the scuppers with sight and verbal gags – most of which come across rather well. There is the occasional dud or weirdness for the apparent sake of weirdness, but these are easily forgotten as the film moves on to more worthwhile material – the smuggling of whores onboard a ship, for example (apparently packing them inside a giant alligator skin doesn’t fool the bos’n like it used to.)

It’s a very fun movie, and even the bad parts are entertaining. Best watched with good friends and a dose or two of rum. Innebriation isn’t required to enjoy Yellowbeard, but it doesn’t hurt.