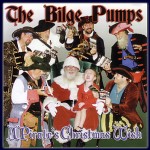 Do I even need to review this album? I mean, seriously – all I need to do is say, “Pirate Christmas CD” and then add, “by The Bilge Pumps,” and then I’d guess most readers will immediately do the math and go running (to or from the album may vary from reader to reader :P)

OK, maybe some of you aren’t already familiar with The Bilge Pumps (seriously? I mean, don’t you even listen to Bilgemunky Radio?), so perhaps I should elaborate. The Bilge Pumps are a pirate shanty/comedy group. Their music is appropriately rough, swaggerly, and peppered with the sorts of off-taste comments you sorta-wish-the-kids-hadn’t-heard-but-maybe-it-went-over-their-heads-and-besides-they-have-to-grow-up-someday. Yeah, that sort of band. And on their new album A Pirate’s Christmas Wish they lend their trademark tastes and talents to re-imagine this classic holdiay through 20+ songs of good tidings and villainy. By and large, this means parodies – A Pirate’s Night Before Christmas, Carol of the Beers, Johnny the Steampunk Pirate, etc. These are the songs you grew up to, and while you won’t be able to immediately sing along to the new, salty lyrics, you can at least hum along as you swig your eggnog (the more rum mixed in the better.)

The music is largely a capella, with sporadic accompaniment from drums, guitar, steel drums (for that tropical Christmas flavor) and even a kazoo. Jokes and offhand comments are also mixed in for good measure. This is not an album of orchestral Christmas music subtly turned towards piratey, but rather a pirate comedy album with a Christmas theme. This is an important distinction, because if you think you’re going to sneak this album into your church’s holiday party mix for a private joke, you’d better be prepared for a quick getaway (unless it’s a pirate church, in which case you’re golden.)

As with their other albums, A Pirate’s Christmas Wish is a bit goofy, and a lot unpolished. Mostly these qualities are put to good effect, although “I Saw Fannie Punching Santa Claus” is a little over the top in the silliness department, and “Blue Christmas” seems like something created on a drunken dare. “Deck the Halls”, however, is a wonderful mix of steel drums and scratchy pirate singing that truly conjures a group of caroling buccaneers. “Jolly Old Saint Nicholas” is another high point with tighter singing, and a fun mix of drums and jingle bells. “A Pirate’s Christmas Wish”, being the album’s title track and the only wholly original track (all others being parodies) is for me the best of the bunch, with fun “yo ho’s”, a great beat, and humorous, holiday appropriate lyrics.

Every year I see more and more pirate insertion into the holiday season – pirate stockings, pirate ornaments, pirate nutcrackers, and so on. But pirate Christmas songs are still few and far between. The Bilge Pumps have done a real service with this album, not only giving us an easy gift idea for any crew Secret Santa programs, but also providing us some fine tunes for any holiday pirate gatherings.