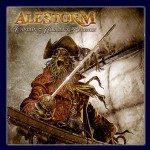 Alestorm’s Captain Morgan’s Revenge every bit appears the standard pirate metal album – the front cover features a skeletal demonic pirate screaming into the eye of a storm, while the back is emblazoned with an original jolly roger over a compass rose and crossed pistols. The packaging is definitely piratey. But as we know, the very nature of metal sometimes make for an album whose cover is the only thing that’s clearly piratey. All too often the typical thrasher growls and yells of “yarrr wahhhh grrrramoad!” could just as easily be “singing” of devil pigs as they might of pirates. This is the crux of pirate metal – but not so with Alestorm.

Captain Morgan’s Revenge begins with the track Over the Seas. It comes on strong and epic with drums, electric guitars and keyboards. This is immediately the music of adventure – full of flavor and glory. And then the lyrics join in, growly and rough – but what’s this? Rather than, “warrrbarrrr sckunnn” we hear a tale of lost treasure and deep sea voyages – clear as a bell (a piratey, rusty bell, perhaps, but still plenty easy to understand.) To my mind this immediately thrusts Alestorm to the head of the pirate metal pack – as a non-metal head I look for piratey lyrics to let me know that I’m not being tricked into listening to fluffy love songs, and Alestorm delivers.

Subsequent tracks delve into other piratey topics. The titular track tells a story of cursed pirates enjoying their last night on Earth. Again a song of adventure, it also boasts a swaggering sing-ability that I don’t often associate with metal – a group of pirates could easily sway their mugs to the music and join in. The Huntmaster takes a faster approach as it shares the story of a wronged hero taking vengeance on his oppressors – sword in one hand, tankard in another. With lyrics such as, “with the power of ale he could not fail,” it’s easy to anticipate this becoming a fast favorite at pirate parties. Nancy the Tavern Wench then takes a slower, more balladish approach as it pays somber tribute to the ladies that see to a sailor’s thirst at the end of the day.

The album continues on with further songs of standard pirate subjects – battle, treasure, wenches, and drinking. The songs are diverse enough to stand apart from one another, while always maintaining a distinctively Alestorm quality. Some of the songs (The Huntmaster, Wenches & Mead) have a slight, tongue-in-cheek humor to them, and many of them also boast a surprising catchiness – “catchy” is rarely a word I would apply to metal, pirate or otherwise, but much of Alestorm is indeed catchy, which makes for an album that’s a joy to listen to again and again.

Captain Morgan’s Revent is a brilliant CD. Where most pirate metal is an acquired taste, Alestorm is a band I can heartily recommend to all pirate-core fans without condition or hesitation.