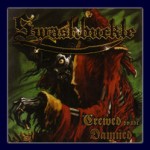 Pirate metal isn’t a new thing – several bands, in fact, have tackled this concept before. But in many cases the only real way you know the music is piratey is by the album cover artwork, and maybe the names of the songs. This is because the untrained ear is unlikely to understand the growls and yells, let alone determine if the lyrics are composed of anything remotely relating to pirates.

No such problem with Swashbuckle. Their music is metal, true enough, but the lyrics – while still throaty growls – remain clear enough that anyone should have no problem understanding the “yo hos” and “bring on the wenches.” But Swashbuckle goes one step further and mixes some traditional spanish guitar and other period sounds into their otherwise tough metal style.

With some deviation, Swashbuckle’s album Crewed by the Damned alternates style between each song, offering one metal, the next traditional, and the next metal once again (and so on.) The metal songs are full of energized guitars and drums, while angry growls yell out all sorts of piratey lyrics (avast ye, drink up me maties, and scalliwagg are all words and phrases heard in some abundance.) The music is fast-paced and kick ass. The non-metal songs spliced between the metal offerings are primarily instumental, and much less aggressive in tone. They nonetheless offer their own range of styles, with some being quick and peppy, and others slow and contemplative.

Crewed by the Damned could be viewed one of two ways. For the purist metal fan, or the purist traditional afficianado, this is a case of Jekyl and Hyde, mixing the saint and the sinner (which is which depends on your particular taste.) But for the more universally inclined, this album offers a fine taste of two vastly different (while dually piratey) genres. It’s an interesting experiment, and one that I think pays off. While some of the metal is a bit abbrasive, and some of the instrumental a bit tame, the album overall is well crafted, and certainly worth a spin or two.