The Pirates of New Providence 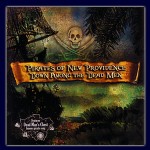 Down Among the Dead Men – the first album by Pirates of New Providence – hits the ground running with its initial track, Fire Maringo. Being a traditional song, I’ve heard it performed before, and have never really given it much thought. But the Pirates of New Providence make it a tough song to dismiss. Strong, clear vocals are complimented by solid drums to immediately command attention. Soon the backup vocals and what I believe to be a tamborine also join in to play with the softer and higher notes. All told, it’s a commanding opener, and one that illustrates the truth that sometimes an old song can be made new again through sheer strength of the performance.

The “newness” of old songs has weighed on my mind of late. As the availabilty to competently performed traditional sea songs expands at a seeming exponential rate, I find that it’s becoming increasingly rare to hear a rendition of any traditional tune that truly stands out from the herd. This is why, upon first finding a CD such as “Down Among the Dead Men”, where every song is traditional, I’m at once curious and fearful. A strong first track, such as is Fire Maringo, is a comforting start, but can the entire album hold up?

Dead Man’s Chest – the album’s second track – lays the groundwork for the rest of the album. The various elements remain clear, with vocals (this time female) and drums ringing loud and true. On their own, its a formula that would lead to an album of decent pirate tunes, but not exactly memorable or groundbreaking. But the Pirates of New Providence are trickier than I’d have expected, and throw in a factor that to my knowledge is entirely unheard of in the world of pirate music: a harp.

When first I heard the plucking of harp strings to the tune of Dead Man’s Chest, my eyes nearly popped from my skull – and I don’t exaggerate. Harps would seem well placed in a king’s court, but when I think of the grungy world of pirates, a harp seems as out of place as would Frasier and Niles Crane on Barbossa’s Crew. So how does it fit in musically? At this point, I wasn’t sure.

Hills of Connemara lacks the new harp element, but has no shortage of instruments. Guitar, harmonica, and I can’t even say what else all join in to make for an energized song with an excellent sound about it. Down Among the Dead Men – the album’s title track – brings that harp right back, though. Again, strong female vocals, drums, and yes – a harp – all combine to do a traditional song in a traditional manner that feels anything but traditional. At this point, I was starting to suspect that the inclusion of the harp just might be an unlikely stroke of genius.

The next several tracks, Haul Away Joe, Rosen the Beau, and Sam’s Gone Away, don’t prominently feature harp work, and therefore feel more akin to the traditional songs one would expect. Strength and clarity remain defining features throughout, though, and the consistently high quality of the recording make each song a delight to hear. Captain Kidd, sees the harp’s return, and this time even includes the strumming scales that would seem more at home in a fairy tale movie than a pirate song. And yet, as a package it works surprisingly well, and makes for one of the most unique Captain Kidd versions I’ve experienced.

The album’s final three songs, Nancy Whiskey, One for the Morning Glory, and Parting Glass, all follow in the tradition set by the previous tracks. Very well done, and with a variety of instrumentals from penny whistles and guitars to flutes (another not-quite-piratey instrument) and ukuleles.One for the Morning Glory is a little sing-songy for my taste, but otherwise these three songs work well to conclude a fine album.

Down Among the Dead Men was my first introduction to the work of Pirates of New Providence, and listening to this album was indeed a small adventure in its own right. Generally speaking, the strong clarity of the vocals and instrumental make this the sort of album that can be experienced as well as merely listened to – a good stereo system or set of high-end headphones make this the sort of music into which you can literally immerse yourself. This alone would make for a worthwhile album, but it’s their daring use of such non-piratey, not-exactly-masculine instruments such as the harp (and to a lesser degree the flute) that make for a truly original CD.