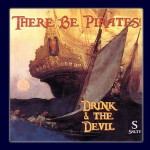 Drink & the Devil, by There Be Pirates, is an album that begins absolutely perfectly. Storm-brewed winds are met with a steadily growing drum beat, and then a shanty-styled introductory male voice begins the opening lyrics to High Barbary. But then the song quickly launches into a charged mix of energized instrumentals and vocals. This is still High Barbary as you know it, but reenvisioned in such a way as to remain true to its roots, but fresh and virile.

High Barbary sets the stage for an album that’s comprised of familiar shanties and sea songs, but performed in such a way as to make them truly stand out from anything else out there. There are no losers in the bunch – this CD is a gem from stem to stern – but several songs do merit some additional attention. Banshee’s Whale is a touching fiddle scratching against an ocean surf accompaniment – a transitional track to be sure, but also perfectly atmospheric and a quality addition to the album. South Australia has a nice, almost whimsical feel about it as it combines a didgeridoo with the more traditional shanty instruments, while the harmonica utilized in All for me Grog lends an additional (and appropriate) hobo flavor to the song.

The Bonnie Ship the Diamond is as close to “rockin” as you can get without departing the traditional style entirely. This song starts strong and does’t wait for anyone, so try and keep up. The Derelict, on the other hand, is slow, somber, and in no hurry whatsoever. It’s truly the crown jewel of this album, being a 10 minute 44 second rendering of the Robert Louis Stevenson classic, but done-so in a smokey lounge style. Dusky and gorgeous, with a mix of male and female vocals this is one of my favorite versions of this song.

I’ve not mentioned the albums other fine tracks, such as Haul Away Joe, Sugar in the Hold, Paddy Lay Back, New York Gals, and Fiddle Aire – each is fine, fine work, and easily worth a listen or two in themselves. The album then concludes with Banshee’s Whale (reprise), which is again a scratchy fiddle against an atmospheric background. It’s an appropriately gentle sendoff to an album that is certainly worthy of benchmark status in the Pirate-Core genre.

4 thoughts on “Review: Drink & the Devil”