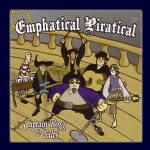 Since the very beginning, Captain Bogg & Salty has always walked a fine line. On the face of it they’re children’s entertainers, and therefore sing silly songs of a kid-friendly nature. But the genius of their first album, Bedtime Stories for Pirates, was that – rather than sounding like preschool teachers like so many other childrens’ “pirate” entertainers – Bogg & Salty lent the impression of being real pirates; actual buccaneers, albeit good-natured ones, doing their level best to “keep it clean” for the duration of the album. This made Bogg & Salty a rare beast, being a pirate band that could be enjoyed by kids and their parents (and even angsty teens and 20-somethings) alike.

Bedtime Stories set a strong precedent that surely proved a challenge to maintain on subsequent albums. Peg Leg Tango featured what became some of Bogg & Salty’s most beloved songs of all time (Pieces of 8ight, Scallywagg), but in my opinion also featured some of the weakest (I’m a Pirate, Nellie the Elephant, Sea Monster). Prelude to Mutiny then went on to reclaim the lost ground with a host of pirate brilliance, including Mutiny of the Hispaniola, Wind, Dead Men Tell No Tales, Hoist the Grog, and Part of Your World. So as the tides between adult and kid-friendly have already shifted time and again, where does Captain Bogg & Salty’s fourth and latest album, Emphatical Piratical wind up?

The album begins with the title track Emphatical Piratical, a friendly, energetic song that fits well with what seasoned listeners might expect of this band. Next up is the somewhat goofy Don’t Drink Seawater, which is the sort of pirate silly song that kids likely love, but adults not so much. It does, however, teach an important lesson about the dangers of drinking seawater (so stick to rum, kiddies*). Port Side, however, gets us right back on track with an 80’s retro style rap song about the parts of a ship – a decent piece that reflects Bogg & Salty’s love of experimenting with various genres.

Treading the Seas for Pirate Gold is a remake of a Hucklescary Finn song, altered slightly to offer a respectful nod to Kevin Hendrickson’s previous Pirate-Core bands, Hucklescary Finn and Pirate Jenny. A fine piece that particularly stands out in the use of the beloved “ribcage” xylophone. Bunnyjacks is a definite children’s song, and a followup of sorts to one of the most famous lines in their earlier song Scurvy. Frogg Island again demonstrates the genre-bending nature of Bogg & Salty with a breezy, island style easy listening song in the style of Jimmy Buffet and such – relaxin’ on the beach after a hard day of plunderin’.

Skipping ahead a bit (reasons made clear later), Sea Monster II is another children’s tune. I wasn’t really a fan of Sea Monster I, finding it far too youth-targeted and “soft” to satisfy my more grown-up piratical music cravings. Never Smile at a Crocodile is a remake of a Disney song, and seems a mix between Bogg & Salty’s earlier works Sea Kings and A Part of Your World – it’s very fun, very energetic, and like Don’t Drink Seawater imparts valuable life lessons. Waltz of the Waves is slow and sentimental, but in my opinion falls rather flat. The album then concludes with Who’s at Captain’s Table, which has a definite Hucklecary Finn air about it and makes for a fine children’s pirate tune, although it too probably lacks the extra “oomph” needed to attract adult ears.

Coming back to the middle of the album, Purple Tiki and Plank Walker I want to mention together, as they warrant special consideration. Tiki is a tribal, two part song that begins slow and spoken and ends fast and sung. It’s silly and certainly kid-friendly, but not so exclusively as to scare off adults. Plank Walker is more of a fifties style, drive-in creature feature song with great guitar work and spooky vocals. Bothof these songs feature pirate elements, both are approachable to kids and adults alike – and neither really stood out to me on first listen. These songs, and indeed much of this album, seemed to lack that extra “pirattitude” in the lyrics needed to really command my attention. But on second and third listen (that last time via my best stereo system, rather than my car’s garbage audio) I realized that while Bogg & Salty may indeed have left this key strength by the wayside on much of this album, they had also built upon another strength – that of the music itself.

Bogg & Salty’s music has always been fantastic, but it’s the piratey lyrics that have pushed it over the top. With this album, and Tiki and Plank Walker in particular, I felt most of the lyrics lacked that extra punch. But the music… never before has this band sounded so incredible. Purple Tiki has the sort of beat that you can’t help but dance to, while Plank Walker so perfectly captures that 1950’s Halloween spook show style it seeks to emulate.

While I do miss the strength reflected in the lyrics of the other albums, I’d be entirely remiss if I didn’t acknowledge that the some of the music on this album is a noteable success of another sort. This album leans slightly towards the younger audience, as kids will surely adore Bunnyjacks, Sea Monster, Crocodile, and Captain’s Table. Adult fans will no doubt enjoy Emphatical Piratical, Port Side, and Treading the Seas, but it’s songs like Frogg Island, Purple Tiki, and Plank Walker that are in danger of being overlooked and under appreciated. If you’re listening for classic Bogg & Salty over-the-top pirate lyrics, you’ll be disappointed as I nearly was. But keep a fresh mind and let the songs – and particularly the music – stand on its own and this album certainly turns up some gems.