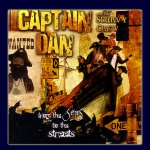 Where to begin when describing the wonderful oddity that is Captain Dan and the Scurvy Crew? By all common sense, such an apparent novelty act should long ago have gone the way of the dodo. But the crew hit the ground with surprising momentum – their first pirate gangsta rap album, Authentic Pirate Hip Hop was a shameless joy to the ears. It seemed an impossible act to follow, and yet, a mere year later, follow it they did with Rimes of the Hip Hop Mariner. But rather than treating us to “more of the same” The Scurvy Crew expanded and developed their hip-hop pirate concept to make for an even better end product. And now, just one year since Rimes, the Scurvy Crew has struck again with their third album, From the Seas to the Streets.

Love them (pirate-core enthusiasts, hipsters, gangstas) or hate them (period reenactors, grandparents, fuddy-duddies), I think we can all agree that Captain Dan and company aren’t ones to rest upon their laurels. For three albums running they’ve reached for new heights, and once again have achieved incredibly surprising and satisfying results. The album begins with the title track From the Seas to the Streets, which starts with a bit of a swashbuckling orchestra that’s soon joined by the rap stylings of usual subjects Captain Dan, Sea Dawg, and Scott Free. A mix of urban and epic adventure, it wakes you right up and lets you know just what you’re in for.

Ship2Ship follows, being a song of battles and seaside warfare. Again we hear the voices of our usuals, but also chiming in is ‘Admirality’ Crawley – the limey who faced off with Captain Dan on Rimes to such great effect as they debated superiority between Pirates and the British Navy. Crawleys inclusion in this second album comes as a fine surprise that adds a brilliant contrast. Burning Sea and Diggin For Gold are two more excellent tracks in the same spirit as Dan’s earlier albums, but Drunken Sailor brings a new twist in being a pirate-rap version of the traditional sailor’s drinking song – it features a fantastic blend of the original tune and lyrics, mixed in with new beats and dialogue. It’s a joy to listen to, and I daresay even a hardcore traditionalist would have to tilt his hat in respect.

Ladies in Scarlet then thows yet another curve ball as it features newcomes Anne Bonney and Mary Read as the primary vocals. A classic “tough chick” rap about how the ladies can kick ass as well as (or better than) the blokes – and these ladies deliver the lyrics with grace and conviction. On the Account and Pirates Code then return to pirate roots, as both were clearly inspired by the actual practices of the pirate and maritime businesses – surprisingly educational for pirate hip-hop (although if you’d rather just dance to the beat, that’s also acceptable.)

While many of Captain Dan’s songs warrant an ‘R’ rating, it seems that each album features one song of truly pornographic ambition. On this album it is clearly Chests O Plenty, which makes brilliant use of a harpsichord combined with the foulest lyrics imaginable. It’s so shocking as to nearly qualify as high art, and I’m ashamed to admit is amongst my favorites on this album (although I have many.) Calypos’s Crabs also pushes the envelope, being a song inspired by the 50 foot voodoo woman from Pirates of the Caribbean (and the fact that she seemed to have a dreadful case of the crabs.) It’s fast paced, energetic, and again features lyrics that will make you spew rum out your nose (assuming you’re drinking rum, of course.)

Blow the Man Down returns us to the slower, swaggering school of pirate rap, and like Drunken Sailor is inspired by a popular traditional song. Again, the influences of the original are clear, but Dan has adapted it to his own purposes and made it his own. A fun piece, and one of the cleaner on this album. The CD then concludes with Pirate Christmas which – as you surely expect – is a pirate rap about Christmas. Featuring slay bells and jolly instrumentals, it talks of piratey wishlists and a kidnapping gone wrong.

With From the Seas to the Streets, Captain Dan and the Scurvy Crew have again struck gold – three albums and forty songs without a dud in the bunch. They’ve managed to reinvent themselves along the way so as to stay interesting, while also being true enough to their roots to remain the performers we’ve come to love – and that’s really an amazing achievement. This time around, their inclusion of additional identifiable rappers and new instrument styles (many hearkening to the pirate era, but put to modern rap usage), has led to new complexity and depth to the music, while the lyrics remain strong, spirited, and entirely piratey. Captain Dan and the Scurvy Crew are surely a gift from on-high to the Pirate-Core world, and this fact is clearly reflected in each and every track of this new album.

3 thoughts on “Review: From the Seas to the Streets”