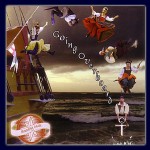 As an entertainment group, Bounding main is essentially a coin with two sides. On the one, we have Bounding Main the live performers – exceptionally talented singers with a clear rapport with their audience, and more than a little tendency towards joking and goofing around. Bounding Main’s shows are generally defined by fun over perfection, where errors and surprises (for audience and performers alike) make each show wonderfully unique. And on the other side we have Bounding Main the recording artists, where the beauty of the vocals and a mastery of the stereo medium have seen the traditional sea shanty evolve into true music, rather than mere lumbering work songs.

In their live performances, Bounding Main often shines best when their songs are fun. On their CDs, however, they shine when the songs are drop dead gorgeous. With their latest album, Going Overboard, Bounding Main attempts to bridge this gap with fun, frequently light-hearted songs that work well live and also work well on CD. It does, however, convey a slightly different flavor that their previous two albums.

Songs such as South Australia, Johnny Come Down the Hilo, and Fire Maringo are peppy and well performed, but not as awe-inspiring as similar songs from their earlier works. Haul Away Joe, for example, has never been a favorite of mine, but on the Bounding Main album Lost at Sea they made this song absolutely glow. Fire Maringo has a similar feel, but comes across as a bit lackluster in comparison. It’s good – just not great. Other songs take a slower approach, which Bounding Main often translates into higher emotional kick. But as with the previously mentioned songs, Fareweel Tae Tarwathie, Ocean Liner, and Leaving of Liverpool don’t quite rise to the level of earlier recordings. Easy on the ears and very pretty, but not quite beautiful and awe-inspiring.

This aside, Going Overboard does have a couple of shining tracks. Blow Liza Blow is amazingly strong – and I can personally vouch that seeing it performed live it’s even more so. Jaw-dropping, is the phrase. Golden Vanity is also a small triumph, although surprisingly so. A very upbeat version of this song, background vocals are used musically to create sounds that are almost goofy, but so skillfully performed that they can’t help but impress.

In many ways, this would seem an album best suited for Bounding Main fans. Not only because fans are certain to enjoy this album’s many fine – if not quite brilliant – songs, but also because Going Overboard features a couple live tracks with prominent audience participation. The Old Dun Cow is a definite favorite at Bounding Main shows, and the bonus track of Drunken Sailor even boasts audience members offering their own lines. Great fun, and a sure treat for anyone who enjoys Bounding Main live.

The last two songs that bear mention aren’t live, but conjure the live show just the same in that they heavily reference the Bounding Main members themselves. Toss & Roll and Pass the Mug are fine examples of the band’s self-deprecating humor as they poke fun at everything from their own lack of navigational skills to weak stomachs. Both songs also involve some fun vocal work and are amongst the catchier songs on the album.

Bounding Main’s previous albums set and exceptionally high bar, and this latest doesn’t quite measure up the same standards. However, if judged purely on its own merit, Going Overboard remains a very fun, well performed CD of mostly traditional songs performed with a bit more musical flare than is normally associated with the genre.