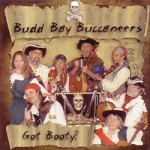 Sea shanties and pirate music come in many forms – some belong in the concert hall, some at a rock show, and others – true to their roots – belong in a crowded pub full of drunken sailors swinging their mugs in rough rhythm.

The Budd Bay Buccaneers’ album, “Got Booty?”, comfortably falls in this latter category. With a variety of light-hearted offerings ranging in subject from rum to violence to prostitution, the Buccaneers put their voices, fiddles, and humor to full swaggering use. Historically inspired but not historically-restrained – they aren’t afraid to depart from authenticity for the sake of entertainment. Songs like “Holy Ground”, “All for Me Grog”, “Hangin’ Davy” each have a wonderfully tradional feel, while “Salamon Gundi” (which can best be described as very white pirate rap) and “The Pirate Alphabet” (which is exactly what you’d guess) clearly exist simply for the fun of it.

“Got Booty?” offers a couple of songs that particularly stand out – “Billy Bones” is a fantastic piece, although I do feel it was already perfected by Skip Henderson. “Rant and Roar”, however, is a fine original piece based on the tradional “The Ryans and the Pittmans,” customized with a load of Northwestern references. And “The Banshee” features the Buccaneers at their best with a song that’s both piratey and catchy.

“Got Booty?” suffers a bit from the same problem that affects many shanty albums in that the tone and content lend themselves better to a seedy shack of a tavern than they do a pair of headphones or 5.1 stereo speakers – it just feels unnatural listening to these performaces through a recorded medium. But this is often an unavoidable evil of the genre, and shouldn’t obscure the fact that the Budd Bay Buccaneers are a wonderfully fun pirate band, and “Got Booty?” is a very fine album of excellently real pirate shanties.