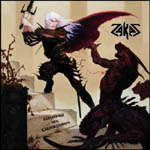 I imagine that, upon meeting an alien life form for the first time, one would at once feel awed, confused, terrified, and overwhelmed. The experience would be both beautiful and frightening, fascinating yet hopelessly beyond our comprehension. Why am I saying this? No reason. Illegitimus Non Carborundum is a fun, bizarre, perplexing, and incredibly diverse CD. To quote Will Turner form Pirates of the Caribbean, “This is either madness or genius.”

So why am I reviewing this CD? It’s not piratey as a whole, but a significant enough chunk of it is. Five songs in a row, to be specific. We’ll start with these.

The piratey segment of this CD consists of Water Witch, Terror of the Sea, Row, Wreckage, and Washed Ashore. We start with Water Witch, an engergitic piece that’s both peppy yet bizarrely creepy. Terror of the Sea, however, is a song for heroes, or at least men of action. Very manly and catchy – I really like this one, it has sort of a rock-epic feel to it. Row is a mix of a spoken-word and singing. Very very piratey, it consistes largely of a captain shouting out orders at his crew as they go into combat. This song deserves special props for ending with a parrot saying “C’mere, wench!” Wreckage is an intriguing yet brief piece that for some reason reminds me of early spoken-word goth music. Wrapping things up is Washed Ashore, which feels like a mix between the opening credits of the Angel TV series and a modern pirate hair band. All told, the pirate-side of this album is very fun and very different. Washed Ashore didn’t do much for me, but the other four were all very good indeed.

As to the rest of the album – again, madness and genius. It lets you know you’re in for quite a ride with its very first song Monster Surf, an instrumental piece that I can only discribe as Munsters go Bananza in Space. Later songs, like El Chupacabra and Micro Mechanisms, conjure images of a mexican police interrogation while Gwar plays in the background or a march of giant midget robots, respectively. The whole album keeps you on your toes as it traverses many styles, many genres, and many, many strange themes.

If you’re looking for a CD chock full of pirate music, this isn’t it. But if you’re bored with your usual fare and would like to brave new waters, Zakas could certainly shake things up. The five pirate tracks provide an extra incentive, but the rest of the album is certainly an adventure in its own right.