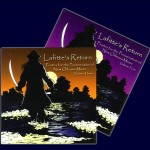 – Volume 4
Genre: Various. Ranges from traditional to metal to lounge. Seriously.
Rating: PG-13
Target Audience: This is perhaps the most universal collection of pirate music ever. If you love any aspect of the genre, these albums are for you.

It’s been roughly one year since PPNOM (that’s Pirates for the Preservation of New Orleans Music) released their intital Lafitte’s Return Albums Volumes 1 and 2. They were really the first of their kind – true compilations of pirate and maritime music from about as diverse a range of styles and artists imagineable. From traditional to PirateCore, pirate-dedicated artists to those taking a first stab at a pirate song, it really had much to offer just about anyone with an interest in the pirate music genres.

Now releasing Lafitte’s Return Volumes 3 and 4, PPNOM has once again brought us some of the widest ranging pirate music imaginable. Those looking for an introduction to pirate tunes will be introduced to such established artists as The Skeleton Crew Pirate Band, The Pirates Charles, Roving Tars, Brine&Bastards, Bounding Main, and many others. Also included is Captain Dan and the Scurvy Crew with their brilliant pirate rap song Flintlock Glock – a point that bears special mention as it does remove the CD (volume 3) from being truly family-friendly with it’s prolific use of the F-word (but were it clean, it wouldn’t be Dan.) All told, these two CDS – especially if combined with the first two – make about the most thorough introduction to pirate music imaginable.

Veteran fans of pirate music will also find much to their liking. Aside from the artists they already know and (hopefully) love, volumes 3 and 4 offer many bands not yet familiar to most within most pirate communities – The Dread Crew of Oddwood offer a sinister yet upbeat original song, while Pirate Tales are so entirely upbeat as to be suitable to a pirate pep rally. Banana Boat, out of Poland, perform two songs that may or may not be piratey as I don’t understand the language, but remain so entirely melodic that I can hardly find it in my heart to complain. MURSIC, on the other hand, bring an ethereal song that seems to lack any pirattitude whatsoever, save that it’s about an island. I’m also not too fond of I’m less fond of Daniel Marcotte’s “The Pirate’s Widow”, which is more of a “story time with uncle pirate” sort of thing, and might prove tedious for anyone over 12 years old. But these few lesser tracks are more than made up for by the likes of Crow’s Nest with a tune that is nothing short of electronic madness. The Grils performance of The Evil Sea is also highly enjoyable and piratey, as is Jon Baade’s contribution of an industrial version of The Derelict. And I’ve not even mentioned the genius contributions of Thyme Awaye, Kenny Klein, Abney Park, The Scurvy Pirates, Roy Mette, and so many more.

Lafitte’s Return Volumes 1 and 2 were easy to declare “must haves” for any and all music loving pirates, and these two followup volumes hold up remarkably. And with such a large and ever growing variety of pirate music available, I see no reason that PPNOM can’t continue to offer us new such albums indefinitely. The only limiting factor would be that of album covers – each boasting the same artwork, the first two albums were red and blue, with these two newer albums being orange and purple. PPNOM will surely run out of colors long before they run out of pirate music. So in the spirit of being helpful I’ve dumped out my old crayon box and discovered these colors that might be of use once all the normal ones are used up: Vermilion, Bimini, Fawn, Alazarin Crimson, Puce, Carmine, and Burnt Umber.

Now that I’ve gotten the “silly color names” out of my system, you’re free to go buy these albums.