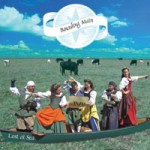 By and large, pirate music comes in two forms, the first being historical. These songs are normally performed by bands of reenactors focusing on sea shantys and drinking songs. Generally speaking, these bands are most appreciated by those who have experienced them live, and who wish to recapture the fun of swinging their grog around amongst a group of friends (I am, of course, painting with a broad brush.) The second form that pirate music often takes would be “pirate core” – music of a more modern nature that focuses on piracy as its theme. Be it pop, rock, metal, or punk, this music is sometimes more polished, and generally more accessible to fans of mainstream music (but perhaps uninteresting or even off-putting to traditionalists.)

So where do we place Bounding Main? Now that’s a pickle. In tone and subject matter they clearly fit with the historical bands. But unlike most sea shanty’s, their musical style doesn’t really evoke a feeling of rustic docks, but instead elicits a much deeper, emotional response.

While clearly singing of subjects nautical, Lost at Sea is not a series of sea songs, it’s a series of music – an astounding feat considering Bounding Main is an a-cappella group. Each member of the six-person crew repeatedly and successfully utilze their voices as instruments in and of themselves, creating melodies that – even if you didn’t speak a word of english – conjure images of the sea, and feelings ranging for festive to forlorn.

Rather than break this CD down song-by-song, I think it adequate to say Lost at Sea ranges from lively drinking songs to exciting, touching, and hopeful ballads. There’s not a dud in the mix, and the album is worth every penny. If I were to offer a criticism, it would be that the crew of Bounding Main doesn’t place enough confidence in the strength of their own voices, and opts to toss in occasional silly noises and whoops during some of the songs. This is certainly appropriate for their live performances, but on this album is has the same spell-breaking effect as a movie-star winking at the camera during a dramatic scene. But fortunately these distractions are mostly contained to only a few songs, and it don’t really impact the quality of the music as a whole.

A fantastic album that reenactors, modern pirate enthusiasts, and landlubbing music lovers can all enjoy in equal measure – as highly recommended as they come.