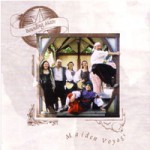 When I think of sea shanties, I generally imagine them as performed by folk singers (i.e. musicians performing fairly down-to-earth, no frills songs recapturing the music of old.) I DON’T generally imagine sea shanties as performed by recording artists (i.e. musicians that seek not only to master the art of music, but the science of utilizing modern studio techniques to maximize the impact of the final product.) It was in this way that Bounding Main caught me completely by surprise. Indeed, I’d previously heard them live a couple of times, and already knew them to be fine performers. But upon playing their CD I was caught completely off guard.

The Bounding Main’s first CD, appropriately titled “Maiden Voyage,” opens with “Mingulay Boat Song,” a slower yet still upbeat song that I confess exceeds the bounds of my limited musical vocablularly to adequately describe. But I can say this much – when I put in this CD, I was nearly half asleep. Once this song got rolling, I was scrambling to turn up the volume and then sat in awe of how it made such use of my speakers – it was almost as if the entire six-person crew of Bounding Main was standing in a circle around me as they sang, making this less of a song and more of a 3-D experience.

“Pump Shanty” is next up – a sea shanty in the truest sense, although I don’t think I’d previously heard a song for pumping the bilge (by my time, bilgepumps were powered by steam.) It’s a wonderfully fun and catchy piece, but more importantly it continues the fine recording quality as demonstrated in the previous song.

“Fiddler’s Green” seems somewhat more standard fare, being a rather nice traditional song about the sailors’ heaven. But “Pay Me, You Owe Me” livens things up nicely again. I don’t know whatever possessed someone to write a song about collecting loans from longshoreman, but it makes for a fun, catchy piece (so long as you’re not the one that owes the money, I suppose.)

“Sailors Prayer” is another highly polished piece, soft and lyrical, followed by the equally impressive “Old Maui,” sung in a slow, low-pitched voice that sounds properly sailor-like. The pace then picks up a little with “A Rovin,” which, while a decent piece, has several portions when extra voices chime in, and it feels a little incomplete without the visuals that might accompany a live performance.

“Blow the Wind Southerly” is an nice, folky song. It’s very well performed, but its moderate, somewhat rolling pace made it one of the less memorable songs for me. But the CD then takes on a more fun direction with “The Mermaid” and “Derelict”; catchy tunes each, with “Mermaid” being fast and happy, and “Derelict” (that would be the “Yo Ho Ho and a Bottle of Rum” song) a bit slower, and just a tad sinister.

The album’s concluding songs, “Leave Her Johnnie” and “Health to the Company” are both slower songs, and easily as good as any on the album, again making the most of the CD medium.

Without a doubt, this is a wonderful album. Instrument lovers will notice that almost none play a role on this CD, but the singers put their voices to fantastic use, and it’s a joy to hear. While the lyrics are all nautical in nature, no one would ever accuse this music of sounding rough or piratey – it’s just too highly polished and well done (that’s hardly a criticism – but it is something that should be mentioned in a “pirate review.”) Some sea songs were meant for dancing, others for parties and background music. But this album is meant for listening, plain and true.