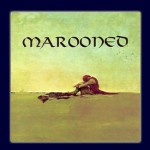 Marooned is an album (and a band) that has a morbidly bizarre sense of humor. It’s (mostly) G-Rated, yet remains a CD largely about death, bastards, and booze. The oddness begins right away with Companion, an a cappella song (as is the entire album) that sounds gentle and friendly. The lead vocals are personable and very human, and the backup vocals are soft yet solid. As to the lyrics? Well, that’s when you start to realize that this seemingly harmless song is actually a bundle of peer-pressure, strongly indicating that the singers will only be your friend if you drink lots (and lots, and lots.)

And therein lies the unlikely beauty of it all – much of Marooned seems tame… until you look closer. Henry My Son makes similar strides as it too sounds like a fairly standard folk song. But again, the edge is found in the lyrics – this time about a real bastard on his deathbed (apparently due to no more than a headache) as he sings of his last will and testament. Whether it’s the debt he leaves his children or the noose he leaves his sweetheart, it’s clear that this is one bloke you’re happier having never met. Bloody Well Dead then continues with words of how grand it is to finally be dead, while When I Was Single is a maiden’s tale of why she sticks with her deadbeat husband.

Mixed in amongst all the morbidity are a few traditional shanties, such as Haul Away Joe, Rolling Down to Old Maui, and the Black Belvet Band. Competently performed, each of them, although I do feel the recording comes off a little on the flat side.

Concluding the album is a song that’s certainly not traditional, although it does have firm roots in scripture – Constipated Men illustrates how many firgures from Biblical lore had difficulties making number two (Noah, for example, passed only water for forty days and nights.) Not terribly piratey, and just a tad heretical. But disturbingly catchy, and I have caught myself singing it to myself in the shower.

Marooned isn’t exactly a must-have album for pirate-enthusiasts, as swashbuckling references are fairly few and far-between. But folks who adore faire music, and especially those who take grim delight in dark humor (you know who you are) would do well to give this album a spin.