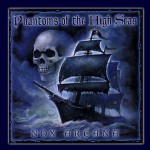 Genre: Ethereal, ambience, spook.
Rating: G (not meaning it’s for kids, though)
Target Audience: Anyone looking for a taste of atmospheric pirate creepiness

It’s been tried before – wholly instrumental albums of ethereal background music intended to capture images of swashbuckling and high-seas daring-do. The problem, all too often, is that if it weren’t for the album cover featuring a ship, jolly roger, or skeletal pirate, you’d be hard pressed to listen to the music and know it was piracy that inspired the artist, and not dragons, cave-dwelling amazons, or any number of other fantastical entities.

With their album Phantoms of the High Seas (which incidentally DOES feature a skull, ship, and jolly rogers on the cover), Nox Arcana goes the extra mile to ensure that there’s no doubt as to their inspiration. The album begins with Dead Men Tell No Tales, and the additions of a haunting “yooooo   hooooo” to the gentle instrumentals do much to conjure images of long-dead pirates just across the horizon. But the music is then joined with an introductory narration in which a pirate’s voice tells of the foreboding tales that have always been one with the sea.

The album then continues with a range of atmospheric music – some of it overtly piratey, and some of it more universal. The High Seas is fast and adventuresome. It features some nice changes in pace and tone, which helps this be more than mere background music as is sometimes the case with primarily instrumental works – this, and much of the album, is suitable for direct listening as well as creating ambiance.

Many of the album’s tracks do an incredible job of capturing a moment of piracy – or pirate-related experiences. The Gallows Jig, for example, uses drum beats and vocals to set an almost tribal quality, which is then transitioned into a dangerous tune of stress and suspense. While it doesn’t quite conjure the Gallows Jig itself, it does a remarkable job of relating to the walk towards a pirate’s all-too-common fate. Crossfire, on the other hand, utilizes a more regimental drum beat. When combined with church bells and string instrumentals (reminiscent of cellos), it perfectly generates a sense of waiting at the town barricade – musket in hand – for an attack that may or may not come. But rapid inclusion of cannons answer that question soon enough, as does the increased sense of danger and action in the music.

While vocals are used throughout Phantoms of the High Seas, fate of the Tempest stands apart as the album’s one and only true song. The performer, combined with soft, spectral music, tells the tale of the ill-fated tempest. Clearly nautical – if not specifically piratey – this is the story of a cold, cruel sea full of mystery and death.

The album concludes with Skull & Crossbones. Featuring a range of ghostly instrumentals, the musical portion is followed by a direct telling of the epilogue of the Tempest and its cursed crew. Church bells and shore surf nicely compliment the story, and leave the listener with a profound sense that ghosts and phantoms are as much a part of the sea as are jelly fish and party boats.

Phantoms of the High Seas features 21 tracks of remarkable diversity. Some, like many of its ilk, could just as easily hail from medieval or fantasy realms. But the clever inclusion of occasional key elements such as cannon bursts, pirate-specific lyrics, and sea-storms nicely directs the ears and imagination to where they should be – (say it with me, now) Pirates! Although I’ve not heard their other works, it’s clear that Nox Arcana has a background in gothic-inspired atmospheric music. They’ve done a fine, fine job at translating their talents into an album of ghostly pirate music that would nicely compliment any coastal stormy night, Halloween pirate party, or evening by the fire with a mug of rum.

5 thoughts on “Review: Phantoms of the High Seas”