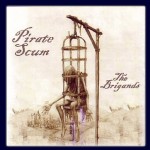 In a world full of festival pirate music, pirate-core music, and pirate parody music (and we love you all), it does seem it’s sometimes hard to find “real” pirate music. These would be tunes performed in the traditional style of dockside taverns, complete with old-fashioned instruments and vocals supplied by voices that were likely yelling “heave the jib to” or “I’ll gut ya like a Spaniard” earlier that same afternoon. But with their new album, affectionately titled “Pirate Scum”, this is exactly what The Brigands brings to the table.

Pirate Scum features a mix of instrumental and vocalized tracks – 8 of the first, and 6 of the second. This alone makes The Brigands stand out, as true piratey intstrumentals are sometimes hard to come by outside of movie soundtracks. On this album, the majority of the instrumentals would qualify as “peppy jigs” – energetic and suitable to bar room dancing or fighting alike. The Little Gale, however, stands out as a more dramatic achievement. It begins like a battle march, with slow drums and a repeating single, deep guitar strum. But then the fiddles join in to add an element of energy – but in this case the energy has a clear danger about it. All the instrumental pieces on Pirate Scum are good, but The Little Gale is on a level of its own – its deeper tones create a sense of forboding even as the fiddles make it clear the pot is already boiling over.

The album’s first vocal track is The Mariner’s Compass is Grog – a title which I must wholeheartedly embrace. The song itself if quite good – slow and affectionate, the singer clarifies just how important grog is to the average swab. Grand Pubs of Yorkshire is also a tributary song, but in this case about the – well, the title sort of makes that clear. Essentially an extended toast in in song form, it strongly embodies the destinctive “real tavern” sound of The Brigands – not polished, but rather crusty and authentic.

On most of this album, the earthiness of The Brigands is an asset to the music. But on Shiver My Timbers, it just doesn’t hold up. Disjointed and awkward, this track is rather hard on the ears. The rushed pace of the performance doesn’t help either. Hanging Johnny, on the other hand, takes its time and makes the most of its rustic appeal. Multiple instruments join a strong yet scratchy voice to make a song that carries an authenticity about it while also remaining an enjoyable listen.

Topman and the Afterguard is easily the most unusual track of the album. The vocals are intentionally distant, and accompanied only by one, single note held steadily throughout. These elements combine for an almost otherworldly effect, and make this both an enjoyable and strangely intriguing song.

The Juice of the Barley closes out the album. More of a silly performance than others on the track, it contains several ad-lib jokes and tangential comments between the lead singer and other performers. It’s likely very amusing live, but on a CD I find this sort of thing distracting.

Summed up, Pirate Scum is a well composed album for anyone seeking “real” tavern music – instrumental or otherwise. Most of it is quite good, and while there are a couple of duds in the mix, there are also a couple stars to help keep the balance.