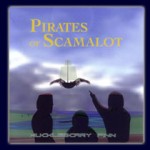 It never ceases to amaze me that one man – Kevin Hendrickson – can simultaneously be behind three pirate-themed bands yet still keep each one distinctive in both content and tone. Captain Bogg & Salty is highly polished, kid-friendly, sometimes silly, and fun throughout. Pirate Jenny is the rock/punk side of things – also silly at times, but relatively grown up, and somewhat raw (in temperament, not quality.) Hucklescary Finn, on the other hand, seems deeply introspective, and musically speaking is certainly the most experimental of the three.

Hucklescary Finn’s previous album, The Last Days of Scamalot, was never available for sale, being instead offered for a limited time via free download. It was full of references to retiring pirates and failing pirate kingdoms. Shortly after, Pirate Jenny was unofficially dissolved. This could lead one to believe Hucklescary Finn might serve as a barometer to Hendrickson’s other pirate projects. I had the opportunity to ask him exactly this, and he denied any intentional hidden messages regarding Pirate Jenny’s fate while recording Last Days.

Intentional or not, I find myself hoping Hucklescary Finn’s new album, Pirates of Scamalot, is as much the indicator that Last Days appeared to be. If it is, then bright days are ahead (dare we hope for a new album from Pirate Jenny?)

The album begins with the short “Treading the Seas of Pirate Gold”. It’s a relatively brief intro, and the only song on this CD that has the trademark piratey “sound” so often heard in Bogg & Salty and Pirate Jenny. It consists of a pirate chorus accompanied by Hendrickson’s familiar voice singing about how he’s been at sea too long, and that it’s high time for a change of pace.

“Storm the Halls” takes us to Scamalot, the magical pirate kingdom referenced in many of Hendrickson’s previous works (Captain Bogg & Salty albums are the notable exception, being as they have their own unique characters seperate from the Scamalot mythos.) It’s a very slow song, which is amusing since it starts with the lyrics, “Gonna kick some pirate ass.” It has a Ulysses-like theme, as Scamalot’s king returns to reclaim his throne.

“Gruel II: Christmas at Sea” is a bit of a sidestep in subject matter as we visit many of the standard Scamalot characters (Scabby, Skreebeard, Perko, and Otis) as they celebrate Christmas as only pirates can (it suddenly strikes me that there aren’t nearly enough Pirate Christmas Carols out there.) A very soft and happy song.

“Scabby Lay Down Your Sword” is very much a folk song, and it seems to depart a bit from the overall theme of Scamalot’s rising. Throughout Scabby is encouraged to put away his piratey tools and explore his softer side. It’s a touching song, featuring vocals and acoustic guitar.

“Ghost Ship” is one of my favorites on this album, and it’s songs like this that make me so thrilled Hendrickson is willing to experiment with such a wide range of styles. It features guitar work that is deeply reminiscent of Pirate Jenny, topped with several new layers that I’ve not heard in any previous work. The repetition in the vocals (“who’s steering the ship-ship”) is strangely unsettling, and therefore works perfectly with the song’s subject matter.

“I Scamalot” is another Pirate Jennyesque triumph, being fast paced and full of wonderful wordplay. With lyrics such as “I scamalot scama little in the middle of another ice age – I jamalot jama little don’t belittle our guitar and drum rage”, it’s an energetic joy to listen to.

“Ukulele Song” is exactly that – a ukulele, with a piano, what I think is an accordian, and the ocean in accompaniment. A very short, but very catchy piece.

“Scamalot Rising” puts the finest point on my previously mentioned hopes that this album bodes well for the future of Scamalot-related projects. The lyrics focus on the return of Scabby’s ship, and even specifically state that “Scamalot is rising from the ashes.” Indeed, I quiver at the very thought that these words are more than just a fanciful song. But that aside, this song is full of hope and energy, and easily an accomplishment in itself.

Up next is the slow and beautiful song “Captain Jennifer” (a name which conjures the image of Pirate Jenny, albeit grown up.) The lyrics themselves speak little of the fate of Scamalot, instead focusing on Captain Jennifer’s willingness to dance and drink tea in the face of danger – stopping to smell the piratey roses, so to speak.

The final song of this album, “Burial at Sea”, was apparently written for Pirate Jenny back in 1993, but has only now found its way to being recorded. It’s a brilliant piece – cryptic and brutal, but not in the usual way. It’s not about violence or bloodshed, but merely the realities (and fantasies) of being buried at sea. Never before have I heard phrases like “pickle my bones,” “our bodies they rot and decay,” and “the fish will make short work of me” used in such blunt manner, and yet somehow transcending their base meanings to become almost haunting and strangely inviting. Just listening to this song makes the idea of my corpse resting on the ocean floor seem fitting and magical (but hopefully not for a very, very long time.)

Pirates of Scamalot is a brilliant album. The instrumental work isn’t as piratey as in the works of Pirate Jenny and Bogg & Salty, but the subject matter of the vocals very much is. It’s a joy to see the mythos of Scamalot carried forward, and I hope Kevin Hendrickson’s psyche has many nooks and crannies yet to explore on this subject. I would first and foremost recommend this album to those who are already fans of Pirate Jenny and Hucklescary Finn. If you’re unfamiliar with their previous works, then the Pirate Jenny’s albums Never Sea Land and Once Upon a Wave would likely make for the best introductions. But once you’ve gotten your feet wet, Pirates of Scamalot will be waiting to take you ever further into this wonderful world of pirate kingdoms, magical scallywags, and waterlogged corpses.