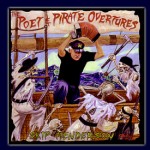 Let’s be honest – when I reviewed Skip Henderson’s first pirate album, Billy Bones & Other Ditties, I wasn’t exactly charitable. Featuring about 3 decent pirate songs, 1 drop-dead brilliant one, and 13 or so ho-hum ditties, I actually expressed a level of frustration that the sheer genius of the title track, Billy Bones, wasn’t reflected throughout more of the album.

Well, I can assure you that it’s quite the load off my mind that I can this time write a much more enthusiastic review – and no charity needed. Poet & Pirate Overtures begins good and strong, ends somber and haunting, and makes for an enjoyable and varied journey between the two.

Poet & Pirate Overtures features many noteworthy tracks – some piratey, some not. But it begins entirely in a piratey manner… well, sort of. Port of Holy Peter doesn’t directly address pirates, but it does feature a dark tone and dark subject matter regarding slit throats, sea slime, criminals, and all sorts of other unpleasant business. Pirates will surely feel right at home. And what’s more, despite being based on a poem from 1918, it’s somehow eluded other pirate bands, and therefore isn’t a song that seasoned pirate music fans will have already heard a dozen times – old yet new, and a joy to hear.

Also a joy to hear are the album’s many other piratey tracks. Drake’s Drum begins with a march-like guitar strum while Skip’s distinctive salty voice supplies lyrics that provide a snapshot glimpse into Sir Francis Drake’s psychy. As was Holy Peter, this is based on an old poem, but one that’s been somehow overlooked by the scores of other piratically-inclined musicians out there, thus leaving it ripe for Skip Henderson to claim as his own. Drake’s Drum is slow and measured, with lyrics that require some deciphering to properly follow. But understandable or not, it conveys an enjoyably piratey demeanor throughout.

Henry Martin is again a song that’s been around for many a year, although unlike Holy Peter and Drake’s Drum, this one has been well covered by many a pirate band. But for all the times I’ve heard it, it’s never really grabbed my attention. Skip Henderson’s crew, however, has managed to add a unique quality. Through rustic, creepified, and slightly – but effectively – “off” sounding instrumentals, this rendition is something I could only describe as Burtonesqe – it’s easy to envision claymation skeletons playing this song (and yes, that is a compliment in this case.)

A Ballad of John Silver carries forward in this same instrumental quality as it tells the tale of shameless debauchery – splattered brains share center stage with hornpipes and dancing. It’s an odd song of sadistic humor in true pirate fashion.

Return of Billy Bones is the final pirate song of the album and – as one may expect – is something of a sequel to Billy Bones from the previous album. But where the orignal song was wry and sinister, this one is somewhat more worn and nostalgic. It’s the story of a pirate that’s outlived his time, with his mates and enemies long gone. Sad and somber, it’s also beautiful and likely to bring a tear to the eye of even the most jaded of brutes.

While the Poet & Pirate Overtures’ above mentioned pirate offerings are – to me – the album highlights, it also features many non-pirate – albeit certainly nautical – songs as well. Some even feature pirate-friendly subject matter, as in Will Watch the Bold Smuggler and Fineen O’Driscoll, the Rover. While the personalites of each seem a bit up-beat and friendly for pirate music, Will Watch does nicely feature booming cannons in accompaniment, while the distinctly non-piratey Cruise of the Calabar in contrast sings of disaster at sea. It’s enjoyably performed, and piratey or no, it has a nicely calloused sense of humor that makes it good company amongst the more overtly swashbuckling ilk.

However, there are some songs on the album that just don’t make for pirate tunes, no matter how you cut them. Capitol Ship is spunky and folky, while The Water is Wide is just too poetic and heart-felt. A beautiful, lovely listen, certainly – but I doubt Blackbeard would take notice. Paddy Doyle’s Boots, however, sounds as though the entire band was smashed when they sang the thing – and nothing meshes better with pirates than drunken singing.

The Poet & Pirate Overtures is a fine album – much of it is decent shanties and folk songs, but it also features a fine offering of several truly unique pirate songs. That so many of them are derived from seldom visited pirate poems from the past hundred or so years only makes them all the more intriguing.