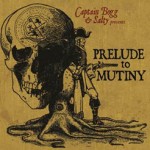 “Prelude to Mutiny” is the third album from the groundbreaking pirate band Captain Bogg & Salty. Their first album, “Bedtime Stories for Pirates,” remains one of the must-have albums in any pirate collection. Next was “Pegleg Tango,” which I felt strayed a bit too much from their strengths, although it still had some very brilliant tracks that were well worth the price of admission. So what of this third album? It contains many of the elements from the previous two albums, and yet brings on a new edginess previously unexplored by Bogg & Salty. And it rocks.

The album begins with “Drunken Sailor.” It starts traditionally enough, with sounds that would befit any historical pirate tavern (there are even drunken bar room patrons added for atmosphere.) At first there is little that sounds like typical Bogg & Salty, with the exception of Salty’s own voice quietly heard singling along in the background. It’s nice enough, but lacks punch… and then, halfway through the album, punch happens, and then some. The music shifts dramatically. The song remains the words and tune of Drunken Sailor, but now, rather than squeeze boxes, it’s rockin’ guitars and drums, to say nothing of the favorite “xylaphone ribcage” – generally reserved for Pirate Jenny albums. It’s a brilliantly energetic way to start the album, and a perfect introduction to what’s to come.

Next on que is “Bosun Whistle.” The song is about the whistle, of course, and all the different things it can mean when its piercing shreak is heard. Vocals are accompanied nicely by pipes, guitars, and the bosun’s whistle itself. It’s a fun song, although a bit toothless compared to the rest of the album.

“Mutiny on the Hispaniola” is a surprising change of pace. Bogg & Salty have traditionally stayed friendly and approachable in their music, but with this song Captain Bogg comes on strong and sinister as he mercillesly rocks out. The lyrics are based on Treasure Island, but the music is uniquely Bogg & Salty – guitars and drums, threats and screams. And utterly incredible.

“Days and Days” is a new recording of a Hucklescary Finn (one of Kevin Hendrikson’s other bands) song from the album “Last Days of Scamalot.” Unlike in the previous version, this one is sung in a clear Elvis voice. In “Pegleg Tango,” Bogg & Salty showed an interest in mixing pirates and various 50’s styles of music, and it was something beyond my own comprehension. I feel the same this time around – Elvis and pirates just don’t seem a good mix. But this song does boast one interesting bit of trivia, as it’s the first time Scabby the seaman – so common on Hucklescary Finn and Pirate Jenny releases – finds his way to being mentioned on a Bogg & Salty album.

“The Loneliest Sailor” is also a new recording of a previously released song, this time from yet another Kevin Hendrickson band, Pirate Jenny. It was, and remains, a very fun and catchy song about a lovesick sailor and his exploits with a mermaid. This recording has more of a “real” feel about it than the version from Pirate Jenny’s “Once Upon a Wave,” almost as though it was recorded live this time around, although there is no hint of audience background noise.

Thus far, this album has notably lacked the humor that defined Bogg & Salty’s previous albums. But “Part of Your World” brings it back in spades. This would be the song from Disney’s The Little Mermaid, which was intended to be sung by a teenage mermaid girl. Here, however, it is sung by Captain Bogg himself, who I picture to be a large hairy scotsman. The result is nothing short of comedic genius. And while you can almost hear Bogg slip into his beloved Elvis voice at times, you’ll be laughing too hard to notice or care.

“Doldrums” is another nice, if not terribly memorable track. It is surprisingly fast paced for a song about the stagnated drudgery of a ship dead in the water.

To this point the album has had several brilliant highs (“Drunken Sailor”, “Mutiny on the Hispaniola”, “Part of Your World”), a few moderates (“Bosun Whistle”, “The Lonliest Sailor”, “Doldrums”) and only one song that just doesn’t work for me (“Days and Days”). But three songs remain, and they are each such stunning works of pirate brilliance that any one of them is worth the cost of the entire album. First up is “Wind,” an incredibly brutal pirate rap. Edgy and awsome, it features Angus Bogg at his finest as he spouts rhymes while electric guitars and electronically enhanced vocals chime along. If there were any justice in the world, songs like this would find their way outside of the usual niche audience. But the world is rarely fair, which means us pirates can hoard this treasure for ourselves 😉

“Dead Men Tell No Tales” is an epic rock piece about silencing your crew in the most cutthroat manner possible. Heavy electric guitars once again accompany edgy vocals. On its own this song would easily be another triumph. But with it following the transcendent “Wind,” it can’t help but fall a little short. It’s only real shortcoming is its unfortunate placement on the album.

Wrapping it all up is “Hoist the Grog,” being a slower, more traditional piece. It makes for a touching and witty conclusion as Captain Bogg sings a tavern song about sharing sea stories – and nuts to whether it’s all a bunch of lies. “Hoist a grog to me mates in the crew. I’ll spin a yarn for ye of the treacherous sea, and I swears not a word of it’s true!”

“Bedtime Stories for Pirates” remains Captain Bogg & Salty’s definitve album, and by far the most consistent in quality. But never a band to settle for predictabilitly, Bogg & Salty has braved some daring new waters with “Prelude to Mutiny,” and with several of these new songs it paid off in spades. “Drunken Sailor”, “Part of Your World”, “Dead Men Tell No Tales”, and “Hoist the Grog” are all incredible achievements, while “Wind” and “Mutiny on the Hispaniola” propel this album into the stratosphere. A definite must-have for anyone wanting to experience pirate rock in its best and rarest form.