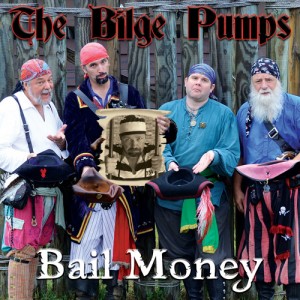 For myself, I was still a fresh-faced junior operative. I’d only graduated from CIA Academy the summer before, where I’d written my thesis on the structure and security of Soviet bilges. In those days there was no one in the free world who knew more about the bowels of Russian vessels than me, which of course led to my own unfortunate codename; Bilgemunky.

The Bilge Pumps had been hired for a mission by the British government, the details of which remain classified to this day (although some jerk Admiral did sell the story rights to Disney. They made a film of our adventures. I think it was called “Tangled”.) Suffice to say, they had need of my particular expertise, and I was all too happy to help in hopes of finally making a name for myself.

I did my best to keep up with this team of crack commandos, and only got a little bit seasick in the process. After the operation’s success there was some talk of teaming up permanently, but I had to decline due to creative differences. That, and Craig was kind of a jerk to me. We went our separate ways.

Much has changed since then. As you probably know, I went on to build a wildly successful pirate utopia filled with superpirates and megawenches, but the years have been less kind to my old friends The Bilge Pumps. Following the collapse of the Soviet Empire, the bottom fell from their freelance maritime demolition business, and The Bilge Pumps took to singing pirate shanties for spare change.

We don’t talk these days, but I’ve always followed their career from afar. I admit to having some concern for my friends during their early musical ventures – those little-known first albums such as “We Need Rent Money” and “Five Bucks For Gas” didn’t exactly inspire confidence. But as their fanbase grew, so did their success. “Brigands with Big’uns” and “Broadside Buddies” showed that The Bilge Pumps were really coming into their own, and with the 2012 release of “Idiossy” I felt they had finally found their stride.

This is why it’s with great sadness that I note The Bilge Pumps latest album, “Bail Money,” which clearly signals this band has stumbled back into old habits. The album begins with Santiano, a traditional favorite sung in their usual a capella that’s so beloved by The Bilge Pumps’ adoring fans. The album continues with many more traditional pieces and a few covers, primarily of the sea shanty and Irish pub variety, including Strike the Bell, The Derelict, The Sailors’s Prayer, and many more. Most are purely vocal, but a few feature some prominent drum or guitar work for spice.

“Bail Money” is a fine, fun album of fair-style pirate songs, although The Bilge Pumps do shake things up a bit with two tracks. “Banana Boat Pirates” brings a Jamaican flair that’s rarely heard on piratey CDs, particularly thanks to the lively steel drums. It’s wonderfully catchy, although it also makes me want to float around the room and terrorize locals (thanks a lot, Beetlejuice.)

The second song of note, and by far my favorite of the album, is a song that’s unlisted in the liner notes. I can only assume this is for fear of legal repercussions, and I’m not going to be the one to tattle (The Bilge Pumps are clearly in enough hot water already.) You’ll just have to buy the album and learn for yourself. Suffice to say, it’s very fun, and very, very 80s.

“Bail Money” just released today and is available through their website as a CD or Digital Download. You can also find more about The Bilge Pumps at thebilgepumps.com. Oh, and happy Talk Like a Pirate Day. Yarrr!!!