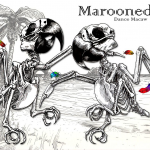 In the world of pirate music, Marooned has always seemed to me a band apart. Neither in-your-face pirate-core (too soft and subdued in nature) nor background easy listening (too stand-out in its sharply contrasted male and female vocals), their music is at once understated yet domineering – somewhat like a passive-aggressive pirate captain with a penchant for morbidity.

Maroon’s newest album, Dance Macaw, is aptly named. Just as they’ve replaced “macabre” in the title with a parrot reference, they’ve (largely) sidestepped their usual macabre nature for a more upbeat approach to sea shanties. This new zest for the energetic life is at once apparent with the album’s initial track, Santiano, and continues on through High Barbaree, The Captain Cried All Hands, General Taylor, All For Me Grog, and Finnegan’s Wake. This initial half of Dance Macaw is approachable and enjoyable, but it’s with Nor Shuddering Maid that Marooned truly goes above and beyond. At first I thought this song title was a typo, as the familiar tune and words of Derelict greet the listener – but as the music goes on it comes to light this is actually a creative continuation of the famous pirate song, and tells the tale from a very different perspective.

The album then continues with some more shanty favorites – a fine cover of Cyril Tawney’s Diesel and Shale and the traditional Maid on the Shore and Blow the Man Down – before concluding with a uniquely appropriate rendition of The Dark Mermaid. I’ve often observed that this traditional tune of death at sea is all too often performed in a peculiar upbeat fashion, and so it was great fun to hear Marooned return to their traditional comfort zone of morbidity in this version. But never ones to leave a grave undanced upon, where most singers complete the song upon the ship’s sinking, Marooned delves deeper until the flesh is rotted and the devil is laughing at the deceased narrators’ expense.

Dance Macaw is a fine album overall, but it’s definitely Nor Shuddering Maid and The Dark Mermaid that stand out. A great listen for fans of Marooned, or anyone looking for a selection of a cappella pirate favorites mixed with a little extra spice.