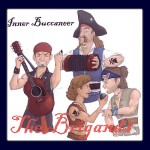 So most “real” news outlets mention when they have a vested interest in a story – full disclosure and whatnot. Seems like a good idea, so I think it’s fair to mention that The Brigands bought me breakfast a few months back. Coffee, eggs, bacon… there might have been some sort of bread involved, like an english muffin or toast, but I don’t rightly recall. I probably drank a bit of rum the night before, so memory may be sketchy. But the bacon is remembered, and appreciated. But let me assure you, it doesn’t affect this review in the least…

INNER BUCCANEER IS THE GREATEST CD OF ALL TIME AND YOU SHOULD BUY THREE COPIES RIGHT THIS MINUTE.

Ok, lame jokes aside (but bacon still remembered), Inner Buccaneer is, what now, The Brigands’ fifth album? It’s pretty impressive that a band made up of one father and three sons is cohesive enough to put out even a single fine pirate album, but five? This man shouldn’t be singing pirate music – he should be writing books on how to quelch mutinies.

I should stop messing around and review this album. But seriously, what can I say that you don’t already know? This is The Brigands – if their reputation doesn’t proceed them, then you’ve been living in a cave. Jigs and reels abound on this album, making up a full eight of the thirteen tracks, so strap on your dancing boots and get ready to do high kicks from the barroom tables. Sea songs, however, aren’t forgotten. Hard Pressed is a strong, rousing tale of adventure as a pressed sailor decides he’s ready to reclaim his freedom. It’s really a brilliant and moving song, although the vocals are a little too softly mixed for my taste. One More Day, The Squall, and Warlike Seamen are more appropriately balanced, and also more fully represent The Brigands’ usual style of vocalizing – less like coddled musicians and more like seasoned buccaneers. By this I mean the vocals might want for some polish, but they more than make up for it in salty pirate flair. Nelson’s Blood concludes the album with a bit of a surprise, however, as it begins with a singer that sounds like he’s just had a final drink too many, but then is quickly joined by additional voices and what seems to be an electric guitar. This modern touch seems new territory for The Brigands, and made for a rather epic conclusion to a fine pirate album.