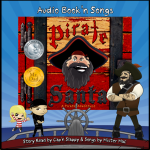 Having reviewed the children’s book Pirate Santa nearly one year ago, it seems a fine time to introduce the companion CD. Yes, it features a booming voice reading the story. And yes, it includes weird and wonderful sound effects. These you expected. What you might not have expected would be the additional music thrown in for good measure.

For those unfamiliar, Mister Mac is a pirate. A pirate, and a children’s singer. Approximately 37 feet tall, his shiny bald head has sometimes been mistaken for the sun, and the adoring children gathering at his ankles appear no more than two apples tall. Yes, much like Smurfs, only less blue.

Music! Fun, good natured pirate music for kids, as sung by none other than Mister Mac. The tunes may be familiar to those who already know his albums, although these version are suped up and cranked up for this new, Christmassy release. Gold Doubloons and Pirate Crew are new versions of old favorites. But Pirate Treasure for Christmas is of course new to this album.

To be fair, I should point out that this is most definitely a children’t album. Where some kids pirate music slyly winks at the adults while baring a half-friendly tooth or two, this CD keeps itself sparkly clean and family friendly from beginning to end. This isn’t the sort of kids music you and your drunken frat buddies will secretly rock out to. But it is exactly what your scalawag nieces and nephews want to hear, and getting it for them will make you the coolest aunt or uncle ever. While you’re at it, get them the iPad version of the book to go with 🙂