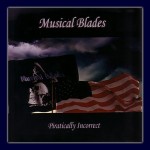 Genre: Contemporary Pirate Folk and Alternative.
Rating: PG-13 (with a little bit of R)
Target Audience: 20-somthings and up

I had a conversation a while back with Patch, lead singer and principle songwriter of the Musical Blades. On asking him what other pirate bands he enjoyed, he expressed to my utmost surprise that he doesn’t listen to other pirate bands – not even a little bit. He does this so that his own writing will remain truly “his own”, wishing to follow his own instincts as to what pirate music can be rather than risk following the leads of others. While I myself could never fathom removing myself from the wealth of pirate music splendour that exists these days, I would offer the observation that Patch’s own abstinence seems to have served him, and the Musical Blades as a whole, rather well.

On their new album, Piratically Incorrect, the Musical Blades show themselves to be a band that fits the pirate mould to a T, while at the same time defying stereotypes and common trends. Their music is soulful yet strong – many of their songs speak of the sort of non-denominational spirituality one finds when clinging to the railing during a squall, while others demonstrate the irreverance one exhibits once making it safely ashore again (and thusly to the nearest tavern.)

In musical style, Piratically Incorrect boasts a unique mix. Where most of the songs feature strong, clear vocals and crisp, lively guitar work, others – such as Drink til She’s Pretty and Orsa Ad Finish (I Ran) [incidentally, NOT a pirate remake of Flock of Seagulls] – hail from the “drunken barn dance” school of music. The album begins with Blackbeard’s Demise, a spoken word piece set to music which sounds as though it were read from the headlines following the famous pirate’s decapitation. It’s an enjoyable piece, and an excellent introduction to this fine album. Next up is Johnny I Hardly Knew Ya – a manly sort of singin’ song, sort of a drinking man’s fight anthem.

Subsequent songs show the Musical Blade’s spiritual side – Old Triangle begins with a longing, and then continues with in a faster pace that nonetheless remains thoughtful. Pirate’s Plea, however, is exactly as the title would indicate – a cry to the heaven’s from a distraught sailor realizing the bleakness of his existence. Later songs share in this somber tone – So Dies the Captain is a touching tribute to a captain that’s passed on, while the bitter sweetness of Pirate’s Lullaby has a distinct Simon & Garfunkel bent to it. Ocean Burial and Maracaibo also carry a slow strength, while still finding their own original voices in turn.

While strength and strange reverence would seem the overriding theme of this album, there is still time made for the alternate side of the coin. Dirty ‘lil Accent is perhaps the most harmless sounding dirty song I’ve ever listened too – think smutty Beatles. Drink ’til She’s Pretty you can guess at yourself, while Ship Load o’ Bastards traces the distress of a sailor who learns that his entire crew is made up of his own illegitimate sons.

Bullgine, Spancill Hill, and What’ll it Be are all decent songs in their own rights, and nicely compliment the album while not entirely standing out. Bring on the Limey Birds, however, is worth a mention as it’s a fine tribute to the female performance group that has often shared the stage with the Musical Blades – a song distinctively funkier than the rest of the album, and a fun change of pace.

Piratically Incorrect definitely charts its own course in the Pirate-Core world – hardly “off the map” in the way of pirate rap or pirate jazz, but also not remotely the “same ‘ol same ‘ol” that can be the trap of pirate faire music. The Musical Blades are definitely a band not quite like any other, and their new album is well worth a listen.