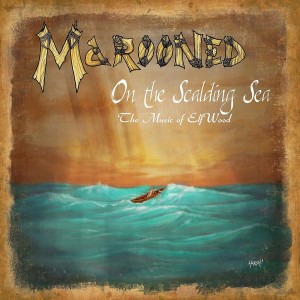 The album begins with Revels of the M’raak. The song begins slow and deep. As is their usual style, Marooned comes across authentic and clear with measured male vocals before the ladies chime in to add a more melodious (and decidedly less orc-like) overtone. This song is a tale of longing and wandering, although it also contains a line about “refusing elvish revisions” which I assume is a dig on AD&D 4th Edition.

Down among the Dead Men and A Wanderer’s Song take a more standard approach to their a’cappella meanderings, but Battle Song of the Dwargs returns to the fantasy direction of this album. Dwargs, as I mentioned, are dwarves – which is preposterous because this is a song of going to sea. Seriously, if there’s one thing dwarves can’t be it’s sailors (or wizards, am I right?)

But alas, these Dwargs seem to be sailing along just fine, right from their opening lyrics of “Gramcha! Gramcha!” which reminds me rather of “Ooga Chakka” if it were performed by the orcs of the 1980 Return of the King cartoon movie (the one where the orcs sing “Where there’s a whip there’s a way!”

Mutineer’s Shanty is a fun remake of the staple Santianno, while Bully in the Alley stays true to its upbeat roots of back street drunkenness.

Where most of On the Scalding Sea focuses on the male vocals, with the female added for spice, His Bright Smile places the ladies front and center. It’s a touching, beautiful song of a woman longing for her seabound love. Thyme Away is also a love song of sorts, but about a ship. It features a fine balance in the divergent vocals, and boasts all the traits one expects of a great “sea song.”

Sailor’s Prayer is a cover of one of my own all-time favorite sailor songs, and one that can drive me to tears under the right circumstances (like when the only rum left is Bacardi.) Marooned’s rendition, however, doesn’t quite strike home for me. It begins rather roughly, but does pick up steam midway though as the singers pick up stride. That said, this song epitomizes my one complaint about this album – where the vocals are raw and real, they also feel too clean and close, as if the singers were standing around you in a recording studio. There’s just not much hint of their anguish, their exhaustion, or the supposed storm raging around them (although actual storm sound effects might prove equally distracting.)

On the Scalding Sea concludes with Hive of the Drey, which is more of an experiential art piece than an actual song. It begins with bees, and a lot of them. If you’re listening with headphones, then you’ll feel like they’re swarming around you, which will be unnerving, terrifying, or arousing depending on your mindset. As the singers chime in with a repeated “buzz buzz buzz” the lead vocals come in with an oft-repeated rhyme of “Listen to my story, listen to my song.” It’s more poetic than lyrical, and conveys a fun sense of anxiety that implies a greater tale just behind the curtain.

It true Marooned fashion, On the Scalding Sea is a fine album. It’s a bit more fantasy than piratey than their other works, but we’ll forgive them this one transgression. Besides, it does make for an interesting change of pace. And on reflection, it’s also far less depressing than their usual faire.

I mis-typed fare, but I’m leaving it because it seems appropriate. Anyways, give the album a look 🙂