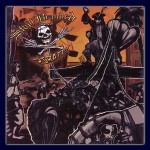 There’s just something about pirate metal. While musically they couldn’t be further removed from actual historical pirates, there’s something in their dress/manner/attitude that makes you believe they “get it.” Blackbeard might have drunkenly sang the songs of the folk singer, but I’d bet gold dust that he’d rather party with the metal-heads. I myself have a special relationship with pirate metal – namely in that it’s the only genre of pirate music that I often need to evaluate/appreciate without ever actually understanding the lyrics. It’s a common trait amongst metal bands to yell and growl unintelligibly – and while it’s not my place to fault them for it, I do find it a bit hard to relate to at times. And this is why I’m particularly appreciative when a band such as Skull Branded Pirates comes along – metal that rocks, but lyrics I can follow.

The Legend of Salty Jim begins with the instrumental track Sail to War. Slow and epic, it takes on the spirit of a movie soundtrack; inviting images of warships before the battle to dance through your head. This track merges directly into Cross Skull Thieves, a song that brings us up to speed with what to expect for the bulk of the album – highly energized electric guitars and drums are joined by a Dio-esque lead singer as he weaves his piratey lyrics of our favorite things (plundering, pillaging, and other salty endeavors.) The pace is fast and aggressive, while also seeming (to this non-expert in metal) pleasantly retro. Cross Skull Thieves sets a tone that is largely echoed throughout the majority of the album’s tracks – all very fun and very good, although also somewhat sounding alike. The magic, however, is in the lyrics for those willing to listen closely. And even from a strictly instrumental perspective there are a couple of standouts. Far Beyond Forever, for example, takes on a slower opening with gently rolling guitars. These are soon joined by vocals that convey a slow strength in a tale that never quite defines itself, but rather cleverly skirts from drinking and dancing to battle and madness. As the subjects change, so does the pace as the music gradually grows faster and faster – by the song’s conclusion it’s classic Skull Branded Pirates through and through.

Throughout the album a number of piratey and pirate-friendly subjects are covered. Hempen Jig would seem self explanatory, while The Stormed & Cursed Seas advises the listener to buck up and face the storm (after all, going down with the ship is better than being stabbed in the back.) So far, pretty standard material. But the CD’s title track, The Legend of Salty Jim – The Lobster King, takes a marvelously surprising tack as it tells the tale of a man-sized lobster who’s battled, befriended, and then made into a battle steed by the singer. The visuals of a pirate riding a giant lobster through the town with cannons mounted to its face are indeed priceless (and make for a fun song as well.)

Perhaps the most noteworthy song of the album is Blackbeard’s Last Stand. Slow and methodical, it accurately recounts the tale of Teach’s defeat at the hands of Maynard and crew. This of course has been done before, although never – to my knowledge – in the form of a metal song. But what’s more, the song transforms itself from a mere narrative into a full-on musical dramatization, with Blackbeard and Maynard each singing their own lines. This, I believe, is a musical first.

The Legend of Salty Jim is a metal album from stem ta stern. Fans of metal and pirate-core alike will find much to love about this album. The Skull Branded Pirates have a truly unique sound amongst the pirate genres, and thus may add some fine variety to any collection.

1 thought on “Review: The Legend of Salty Jim”