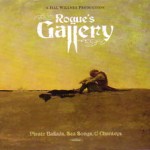 As the story goes, Johnny Depp and Gore Verbanski were so psyched about their recent Pirates of the Caribbean work that they decided to embark on a pirate project of their own. They co-produced Rogue’s Gallery, a two-disc album of 43 traditional sea-shanties as interpreted by a large and varied group of distinctly non-shanty artists. A bold proposition, to say the least, and one that could result in genius or catastrophe.

As fate would have it, Rogue’s Gallery contains a helping of each, along with a large dose of the decent-but-safely-benign. The album begins weakly with Baby Gramps’ “Cape Cod Girls” – a scratchy piece of tunelessness that drags on for a full seven minutes. But Baby Gramps does find more comfortable footing on the second disc in “The Old Man of the Sea” – a livelier, albeit vaguely lecherous, song much more befitting their particular talents.

Between these two CDs, in fact, several artists are paired with perfect songs for their own styles, and at such times Rogues Gallery is golden. Nick Cave is wonderfully sinister in his rendition of “Fire Down Below”, Joseph Arthur’s commanding vocals make for a fantastic version of “High Barbary”, and Mark Anthony Thompson combines guitars with didgeridoo for a haunting “Haul Away Joe.” Worthy of particular note is Bono’s “A Dying Sailor to His Shipmates,” a hundred-year-old song that couldn’t have been more perfect for him had he written it himself.

But surprisingly, one of the largest names on the album – and certainly one of the most fitting for the material – makes two of the most forgettable songs. Sting seems so at home with the Irish-pub style music that he could easily stand in for any tavern shanteyman in the country as he sings “Blood Red Roses” and “Shallow Brown.” A perfect match isn’t always a memorable match, it would seem. But that said, many other artists crank out performances that are entirely decent, but sadly fail to take the material anywhere noteworthy – Teddy Thompson, Bob Neuwirth, Martin Carthy, and Ed Harcourt to name only a few.

Still, adequate-yet-tame beats one alternative. A few noteworthy artists manage to contribute works nearly unlistenable. Three Pruned Men’s version of “Bully in the Alley” is not only atrocious, but contains botched lyrics that demonstrate a complete lack of understanding of what the song is about. But if you can’t sing along with them, at least you can laugh at this little oddity. Sadly, David Thomas’ “What Do We Do with a Drunken Sailor” can’t even boast that much – perplexing and painful, it’s a droning disaster. Ricky Jay & Richard Greene also offer a peculiar novelty, that being a fiddler playing “A Drop of Nelson’s Blood” while a narrator recites a poem complaining about the fiddler’s apparent lack of talent. Less music than performance art, this piece isn’t so much bad as weird.

Be it good, dull, or ugly, Rogue’s Gallery certainly offers an incredibly vast assortment of sea shanty – or sea shanty inspired – music. Many artists manage passable renditions of these traditional songs, and a few even inject enough of their own style in to achieve brilliance while remaining more-or-less loyal to the original works. A handful of others, however, take their songs into surprising new territory. Bryan Ferry combines haunting vocals and piano for a truly wonderful version of “The Cruel Ship’s Captain.” Eliza Carthy does a fantastic job with the lively yet sad “Rolling Sea,” and Jarvis Cocker’s “A Drop of Nelson’s Blood” carries an almost classic-rock-ballad feel about it. But perhaps most noteworthy of all is Jack Shit’s (not a typo) “Boney Was a Warrior”, in which they’ve created a sea shanty you could nearly club-dance too – no small feat, for this album or any other.

All told, Rogue’s Gallery is a mixed bag. I’d call it 50% decent-but-unremarkeable, 30% brilliant, and 20% downright-dreadful. Fans of traditional sea shanties might question the value of having mainstream singers commandeer music outside their own genres, but fans of experimentation may appreciate seeing what the new blood came up with.

Word has it a sequel is in the works, and that they already have most of the material left over from the first albums cutting-room floor. Listening to anything that took backseat to Three Pruned Men is a frightening proposition, although a follow-up album may yet have merit. Personally, I’d love to see more from those bands that managed to create some truly worthwhile tracks this first time around, and perhaps mix them in with a few of the more mainstream-friendly sea shanty groups. Seeing Bono spliced between the likes of Bounding Main and the Jolly Rogers, for example. Now there’s a pretty notion…