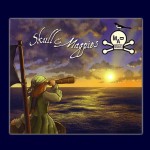 With its cover of what appears to be a young pirate girl staring at the sunset through a telescope (terribly unwise, now that I think about it), The Mad Maggies new pirate album “Skull&Magpies” has the appearance of a children’s CD. The inside art, featuring the band in fun, colorful cartoons as well tends to reinforce this notion. But, while it doesn’t really feature any material inappropriate for the young’ns, Skull&Magpies is hardly a children’s CD. Rather, it’s for anyone who loves pirates and has a taste for the eclectic.

With its opening track, Seaborne, you’re immediately struck by the atypical nature of this music. Tubas, saxophones, trombones and clarinets aren’t the usual tools of pirate bands, but the Mad Maggies aren’t much on conformity, it would appear. Seaborne begins as a gentle rolling tune with some underlying pep. It’s a fun listen, although this instrumental track doesn’t do much to conjure swashbuckling images. This is instead left to the next song, For the Love of Pete, which features drums and guitars to accompany the lyrics in a tale that’s steeped in pirate references – deep seas, whales, Port Royal – even booty. The nature of the music itself remains distinctive in the pirate genre, being peppy and friendly rather than rough and raw.

Next up is Navigate, a song that is essentially the equivelant of Pirate Schoolhouse Rock whereby the singer reminds us that whenever we’re lost we should take our time, recall our studies, and apply our mathematical skills towards proper navigation.

Initially I had some difficulty figuring how to describe The Mad Maggies’ music – almost like a children’s entertainer trying to cut loose, but not quite. But then, during the song High Seas Lament, it all became clear. This song’s strong message of mutiny contrasts vividly against the 70’s, hippy style of the vocals and instruments. The result can only be called pirate freedom folk jazz – something I can’t say I’ve ever crossed before. This unique tack is effectively revisited in Rough Music – again a tale of mutiny, and again befitting a pirate-themed VW Bug. A definite ‘power to the people’ (or rather, power to the pirates) song with powerful lyrics of “heed these sounds of righteous discontent – we shall have proper recompense” that would seem quite at home in a disgruntled sailor’s picket line.

Just as I found a way to quantify The Mad Maggies’ musical style, they shift course with Fair Winds. The opening hearkens of tropical resort music – a pinch of Jimmy Buffet. When the vocals join in the song takes on a more longing flavor as the lyrics sing of being away from home and loved ones. Il Y A Un Bal then follows with a taste of New Orleans Jazz. The initial verse is as unintelligible as is the title (probably just a spell check error :P), but then the singer reverts to english to sing a song of partying. Energetic and danceable, but entirely not about pirates. I assume they were just drunk and forgot to add pirate lyrics, so we’ll forgive them.

The above songs are mixed in with occasional instrumental tracks: Dark Matters, The Folly of Fame, Sandglass, Morning Star, and Where to Next? Each is surprisingly varried within itself with definite changes of pace, instruments and tone. Some are more fast and jazzy, others slow and somber. All are good, but like the opening instrumental track Seaborne, they don’t specifically capture the traditional pirate flavor.

Skull&Magpies is definitely a beast apart in the world of Pirate-Core music. Its nearest contemporaries would likely be Rustmonster for the jazziness and The Ben Gunn Society for the quirky, slightly hippified nature of the lyrics. But even these are a stretch for comparison. This album might not be the perfect fit for those looking for traditional pirate music or standard pirate-core, but anyone who enjoys a wider variety – or those with a taste for quasi-folk songs of quiet strength and rebellion – should definitely check it out.