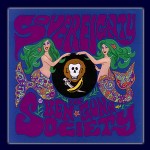 Having achieved such a creative marvel with their first album, The Ben Gunn Society, it’s difficult to imagine what the band of the same name would follow up with. After all, the entire album was indeed about Ben Gunn – that cheese-hankerin’ castaway from Treasure Island. So to make a second album that had nothing to do with the old man whatsoever… well, it’s difficult to fathom.

The Ben Gunn Society have addressed the dilema by slightly reinventing themselves in their second album, Sovereignty. They’re very much still the same band, and indeed, and they still have the same wonderful, They-Might-Be-Giants-ish quirkiness. But now they also seem to be the psychodelic free spirits of the pirate community. And if that seems unusual, it’s only because it is – and therein lies the beauty. Goodness knows, the ever-growing pirate music genre needs originality like it needs wenches and grog.

Next up is Don’t Bother to Call on Me, a soul-sharing coffee-house piece about how the singer ain’t budging unless you’re here to recruit him as a pirate. Soft vocals and an almost ticklish guitar combine to make for a song that merges piracy with the artsy college crowd. The Seventh Wave shares this unique, cross-cultural quality, but tells its story slightly more aggressively. Pirate Queen, on the other hand, is something new altogether. Throughout the first album, lead vocalist Igor Koyfman largely defined They Ben Gunn Society’s style – his clear Russian accent is indeed a large part of what makes their music so uniquely wonderful. But for Pirate Queen, fiddler Zarina Silverman takes the mic as she sings the story of a woman unhappy with the genteel life, taking to the seas and turning a’pirate. Zariana hits the ground running, and combined with the energetic music weaves a tale of unladylike behavior and nautical butt-kicking.

With Sunshine and then Dagger, Igor and Zariana take turns at lead vocals. Both songs have great quality and are fun listens, although you have to pay very close attention to determine if they’re actually piratey (based on their first album, The Ben Gunn Society sometimes sneaks in a non-pirate song or two, the tricky scalliwaggs.) Leonard’s Lament then sees a genuine change in pace, with almost a punk-like quality about it. Aggressive guitars and vocals that only barely restrain a scream again sing of events that seem to bounce between normal life and piracy. Room-mates, Rip Van Winkle, and the high seas – this is a song I can’t quite follow. But where Sunshine and Dagger remained a fun listen for me, Leonard’s Lament isn’t quite my cup of grog.

Tannic Wine sees another stark shift – slow and forboding, it has a style about it that would seem a departure from The Ben Gunn Society’s usual upbeat nature. And yet their distinctive sound is still very much present. By and large this seems a pirate-friendly if not pirate-specific song, although there are just enough maritime references to remind you that piracy remains at the soul of this album.

Rat Cotillion is the most whimsical track, being a story of the rats dancing away in the ship’s bilges, while Lord Admiral could almost qualify as cheeky 17th century social commentary against Captain Morgan’s having turned pirate hunter. Both are fine listens, and classical Ben Gunn. The same can easily be said of Broadside and Long Pig, both visiting pirate material, and both very much harken back to the musical styles of the original album.

Leonard’s Salvation is clearly a continuation of Leonard’s Lament, for better or worse. Lucky, to me, is a throwaway song, being a somewhat fluffy song about happiness being treasure enough. The Parrot and the Monkey is a much slower song than one might expect from such a title, and has a somewhat closing feel about it as the parrot flies away and whatnot. Conversely, The End of the Universe has an almost waltzy, hopeful overtone as Igor sings about the demise of all things.

Sovereignty holds up very well as a sequel to The Ben Gunn Society. Fans of the first should very much enjoy the second. It’s in many ways more subtle than the original album – such songs as “I want to Be a Pirate”, “True Pirates”, and “Hey Monkey” left no doubt that it was a pirate album through and through. Instead, Sovereignty takes a more delicate approach – in many cases the music stands out as much as the lyrics, and if you don’t pay attention, you might forget that it’s piratey at all. But piracy is there, have no fear. And whether you’re actively aware that you’re hearing lyrics of pirates or not, odds are you’ll be enjoying yourself just the same.