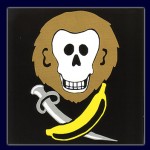 1) The Ben Gunn Theme – The album wastes no time and plunges us straight into a delightful song about everyone’s favorite castaway, Ben Gunn (shame on you if you said Gilligan.) This piece is slow and lonely, yet fun (much like Ben’s average day, I’d expect.)

2) I Want to Be a Pirate – Next up is a change of pace with a speedy little number about the joys of being a pirate. This song is an absolute delight, and is exactly what They Might Be Giants would sound like if they were pirates (and if they were Russian.)

3) Hey, Monkey! – The title is about a monkey, but most of the song is about bananas. It is every bit as fun and refined as any song about bananas should be. Catchy.

4) True Pirates – True pirates spend all their money on wenches and grog, what more do you need to know? Rockin’ banjos and fun lyrics make for another quirky treat.

5) Providence – More haunting than their other songs, this instrumental piece serves as a nice transition.

6) One Flew Over the Treasure Chest – Peppy and full of cheese references, Ben Gunn tells us what it’s like to be a castaway surrounded by goats and gold. Like much of the album, this track is quirky, catchy, and also brings us back to the They Might Be Giants flavor.

7) Meditation – Instrumental and non-threatening. Nice, but not terribly memorable.

8) Apples in the Barrel – Perhaps this song, more than any other, best illustrates what I love about this album. Who but the Ben Gunn Society could make lyrics like, “Out on the sea, there is not much in the way of culinary variety”? A fine tribute to John Hawkins’ favorite hiding place.

9) Cosmic Wind – This song marks the albums first departure from the Ben Gunn/pirate theme. Sort of a space-lounge piece about storms in outer space, it’s not really my thing.

10) Ben Gunn – Another visit to the Ben Gunn Theme song, what more can be said? We’ve heard it before, and I still love it. This time it’s a little faster paced, but essentially the same.

11) Red X – Easily my favorite song on the album, Red X combines the story of Treasure Island with a catchy beat and even more mentions of cheese.

12, 13, 14, and 15) Ham Sandwich, Success, No Problem, On the Deck of the Hisponiola – These four songs are all wonderful additions to the album, staying true to the tone and subject matter. But none really stand out enough to bear much individual comment.

16) Black Mountains – I don’t know what this song is about as it’s entirely in Russian. Nice sound to it, though.

17) The Ben Gunn Theme (reprise) – An instrumental conclusion in the tune of Ben Gunn.