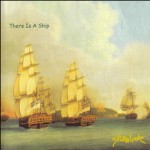 When I was little I used to watch low-budget cartoons from Japan. I remember one with three robots. These robots could combine to make a larger, mega robot. But the trick was, they could do it in any order. When the yellow robot was the head, it created a robot with different strengths and weaknesses than if the red or blue robot was the head – each of whom carried their own unique talents to the equation. And so it is with 3 Pints gone, a renaissance/maritime band that frequently shifts lead singers throughout their album “There is a Ship.”

3 Pints gone has become a renaissance and pirate faire favorite in the midwest. They sing a variety of songs at their shows, but this album focuses on the nautical end of the spectrum. On this CD, 3 Pints Gone makes a habit of shuffling lead singers, which results in some wide differences in both tone and content from one track to the next. It also leads me to make the unusual review decision of breaking this CD down by singer, rather than by track.

James Kuehl sings the vast majority of songs on this album, and tends to be highly energized and peppy, regardless of the song material. For many songs this is highly suitable, as in Jolly Rovin’ Tar, Away Rio, and Empress of Ireland (easily his best song on the album). But some other songs seem a less-than-perfect match. Fire Down Below, for example, is customarily a song about either a) hell or b) gonorrhea. Whichever the case, Kuehl’s vocals are just too friendly and chipper for a good fit. His voice carries a strong (albeit sometimes twangy) “spin yer partner round” aspect, and it follows that emotional charge simply isn’t his strength. As such, the songs led by him are generally best suited for dancing, clapping, and outright singing along with.

Kathleen Masino makes only one appearance on this album as the lead singer, although her voice is prominently featured on many other tracks in support. Her song Willie Taylor is a speedy, catchy piece that also features some fun guitar and fiddle work. A fine tune about a woman who won’t take back seat to her favorite sailor’s new girlfriend. Loyal to a fault, perhaps.

Bill Masino takes the lead for the remaining songs, and brings a literal 180 degree shift. Where Kuehl’s vocals were “get up and dance a jig,” Masino is entirely “sit down and listen.” His deeper, somber voice commands a strong emotional impact, and is well suited to the likes of Final Trawl and A Sailor’s Prayer. He does an equally fine job with the peppier Farewell to Nova Scotia, although the album’s closing track, Wind in the Riggin’, seems a tad lacking. It’s a warm, touching, well composed piece, but I can’t help but feel that Masino seems somewhat restrained, not quite putting his all into this song of storms and wreckage.

Generally speaking, a song is almost always more than just the lead vocals, and the instrumental and back-up vocal contributions on this album shouldn’t be overlooked. But as mentioned in the introduction of this review, it’s not merely the lead singer that shifts between songs, but the tone of the entire band. In the ten songs led by James Kuehl, the music is generally fast and jiggy. A couple of these songs don’t seem as well composed as most (Rollin’ Down to Old Maui and Leave Her Johnny both feel somewhat “off”), but the vast majority are well paced for rollicking festival music. Kathleen Masino’s song, as previously mentioned, features wonderful instrumentals, as do Bill Masino’s four contributions. Bill’s songs, in fact, easily feature the entire band at its very best, with gently moving instrumentals and excellent backup vocals. Personally I’m a fan of deeper, more layered music that’s written for listening as opposed to dancing, and it’s with these songs that 3 Pints Gone truly delivers.

“There is a Ship” is an album of widely divergent content. While all the songs are of a traditional feel in the maritime tradition, the vast differences in James Kuehl’s and Bill Massino’s styles seem as though they’re from different bands entirely (Kathleen Masino’s, rather diplomatically, seems relatively at home with both.) The bulk of the album is in the knee-slapping tradition, with a few helpings of slow and introspective. Each is largely well done for its chosen genre, if not entirely cohesive within the context of a single album.