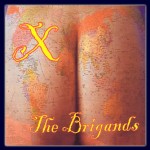 The cover. My god, the cover. It’s an ass. At first glance, I thought it was a rashed, diseased ass. But no, it’s an ass with a map of the world. I don’t know if that makes me feel better or not.

Awkwardly icky as its ass cover may be, considering that The Brigands’ latest album is titled “X”, you can perhaps begin to anticipate what sort of music it contains. Sea shanties and jigs, of course, but also plenty of pirate smut. Filthy, tasteless pirate smut. And that, of course, is why we love them.

The album begins cleanly enough with the Mariners Revenge song. Originally performed by The Decemberists, the Brigands’ own rendition does a fine job at capturing the fun of the original, while still giving it a definite Brigands flavor. Triple Scotch then treats us to a peppy jig before dropping us into the deep end of smut with The Period Song – a humorous ditty about exactly what you think it’s about (hint: it ain’t punctuation.) No holds are barred in this song of menstruation, and yet still it doesn’t adequately prepare for the next track, Get In, Get Out – a manly chant about, again, exactly what you imagine. Where The Period Song leaned towards the shocking side of humor, Get In, Get out is leaning so far as to risk falling over – but it does manage to keep its feet (barely), making for the sort of filth many a pirate will laugh at, and then realize they’re going straight to hell.

Sarum’s Song returns us to lyricless jig territory – a bit more swaggery than danceable this time, it’s easy on the ears and a welcome break to catch your breath after the previous tracks. Hoist the Colors is a cover of the song made famous in Pirates of the Caribbean: At World’s End. In the past I’ve found The Brigands’ covers of movie songs to be a bit rough and jerky, and Hoist the Colors is no exception. Their version is slow and piratey, but for some reason this band loses a bit of stride when treading into Disney territory.

But, again true to form, they quickly recover with Flowers of Edinborough – a fast, highly energized jig the likes of which will surely burn a hole in the bottom of your shoe if you’re not careful. Rummer, the Rumrunner is then a highly enjoyable story of a pirate who collects diseases like others would trading cards. A Man from Portwater then returns us solidly to the dirty realms – this time even including bestiality. Particularly awkward being as it’s a rather catchy sing, and you’ll likely join in – just do so quietly.

Ben Backstay is an a cappella sea song that most stands out on this CD in that it doesn’t appear to be remotely smutty – I keep listening for the overt double entendre’s or outright profanity, but it appears to be absent. And so we move on to The Pyrate’s Way. Again, not at all dirty, but it does boast a fine enjoyable quality of its own. Sort of a “What Would a Pirate Do?” song, it makes for a very fun original piece.

Good Ship Veinus (that’s the spelling in the liner notes, which to me conjures a disturbing image) is The Brigands’ version of the famous historical smutty song. It’s a fine performance, making for a song that’s enjoyable, danceable, and utterly filthy. The Brigands then send us off with The Hellion’s Delight, being another of their signature jigs. Again from the gently energized school, it’s an excellent – if deceptively innocent – conclusion to an album of pirate songs and pirate smut.