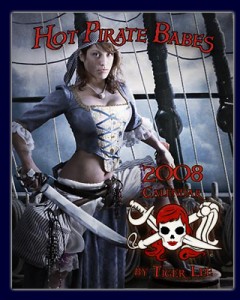 As if the year wasn’t going by fast enough, it seems that 2008 calendars are now on the market. It’s a notion I find frightening, but at least the 2008 Hot Pirate Babes Calendar is here to give us a more inviting taste of what’s in store for the coming year.

I’ve previously reviewed the 2007 Hot Pirate Babes Calendar, and I’m pleased to note that 2008 will carry forth in the fine precedent set – that being one of hot babes (appropriately enough) gussied up in pirate gear and holding pirate accessories in pirate settings and striking pirate poses. It’s a simple enough formula (at least on paper), and one that works rather well.

By and large, my 2007 review could almost verbatum apply to 2008. Tiger Lee’s creative artistry with merging women and artificial backgrounds into a single glorious image remains true to form. The costumes vary from the fancy to the battle-hardened, and from cortesans to captains (albeit babe captains.) As to the calendar itself, it too follows in 2007’s style of parchement-like visuals, complimented by modern holidays, pirate fun-facts and “today in history” type segments.

Normally reviewing an item as being “more of the same” would seem lackluster, but in this case it’s the height of praise. But there is one small differences between the years that I feel worth noting, and that would pertain to the “death snarls” I thoroughly addressed in my 2007 review. In the previous calendar, several of the girls sported facial expressions that seemed rather warlike – appropriate to the “pirate” end of things, perhaps, but possibly not in tune with the “hot babes” element, and certainly not the sort of looks a guy might hope to receive from a hot pirate babe staring at him from his wall for the duration of a month. 2008 indeed seems on the friendlier side, but let’s be analitcal about this so as to stay truly unbiased:

While it should be noted that not all the “Let’s Fight” girls were snarling (some actually look quite delighted at the prospect of dishing out violence), it’s plain that 2007 ranks high in the bloodthirst department. Whereas 2007 hosts a full six babes in the “I’m feeling stabby” camp, and a mere four on the flirt end of the spectrum, 2008 has five flirts, and as a special bonus, three more babes who look ready to do a tad more than flirt. So if you enjoy checking out Pirate Babes that appear ready to spill your intestines across the deck, 2008 regretably won’t be your year. But for the rest of us, things are definitely in an upswing.

Speaking of whether 2008 will be your year (at least from a Hot Pirate Babes perspective), there is one other group that has been sacrificed for the greater good – the foot fetishists. Indeed, whereas 2007 was almost entirely composed of whole-body shots, feet and all, 2008’s models are zoomed in a bit more. This results in loss of those glorious boots and toes, but does enable a somewhat closer experience with the Babes’ more northern assets. Just so ya know 😉

Little more need be said. I like pirates. And I like babes, the hotter the better. If you concur, then the 2008 Hot Pirate Babes Calendar may give you one less reason to cry like a little girl when you realize January will be on you before you know it.

* Mathematicians will notice the 2008 tally only adds up to 11 babes. This is because Ms. December (who also happens to be the cover girl pictured with this review) wasn’t counted, as she bears an expression that is beyond my ability to read. Lust? Anger? Sleepiness? Arbee’s? I count myself stumped, and would welcome reader’s thoughts.