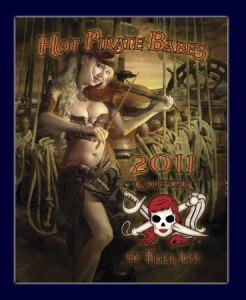 Now entering its fifth year, the Hot Pirate Babes Calendar has become a mainstay within the pirate community. Indeed, there’s a special place on my office wall that just wouldn’t be the same if it didn’t have a fetching pirate lass – be she angry or inviting – staring at me throughout her 30(ish) day reign. 2011 is nearly upon us, so now’s the time to lock in your year of pirate hotness. If you want it to be a year of surprises, then read no further as I will now engage in my annual ritual of evaluating these lasses’ varying degrees of pirateyness, combativeness, and – indeed – hotness.

January begins the year with a strong baseline. “Coastal Beauty” isn’t so much a remarkable or terribly creative photo as it is classic. The model boasts an “almost” functional pirate outfit (hardly historically accurate, but she might not catch her death at least) with weapons at the ready. Her steady face looks like she’s preparing to aim her flintlock – but what’s this? It’s not you she’s studying, but something over your left shoulder. Perhaps a villainous seagull, or god-forbid an airship pirate. Whatever is descending upon you, she’s about to make mincemeat, rest assured. February’s “Check Matie” takes a different approach, with its Sigourney Weaver lookalike model adopting a snarky expression just this side of mocking. Her attire falls somewhere between a strumpet and a circus performer (a sideshow doxie?), complete with the infamous crotch-cravat introduced in previous calendars. The slight awkwardness of February is followed by a different awkwardness in March. “Curvy Dunes” features a hot enough model, no doubt, but I’m afraid her Napoleon-esque uniform is wearing her – she just lacks the domineering presence of a four-foot tall French dictator. Not commonly a feature I look for in my pirate babes, but in this case it might have served her well. And there’s another of those damned cravats ;P

April’s “Dashin’ Doxie” returns us to the world of solidly lovely gals in outfits that might – might – not fly off in a light breeze (consider that a good thing or a bad thing according to your preferences.) But what makes this month stand out is that it’s more of an action shot than most. While many of the Hot Pirate Babes are clearly posing for the camera, Doxie is a snapshot of a pirate lass who’s just finished shooting one of your shipmates (and just might have one more bullet for you – hopefully you haven’t jilted her recently.) May’s “Bella Señora” bears all the qualities of Spanish seductress, save for the flintlock at her hip and the knife raised above her head. She’s a pleasant enough sight, although I don’t believe for a moment that she’s actually set on cutting me with her blade, which makes me to wonder why she doesn’t just put the damned thing away and hand me my drink already.

Throughout 2011, I’m afraid June will be one of the two weakest months. “Washed Ashore” is far too posed for my liking, and while her skin, hair, and clothing are drenched within an inch of their lives, her hat (a glorious hat, I’ll grant) seems bone dry. Between her appearance as flotsom, a shackled arm and defensive posture, this is clearly a picture meant to tell a story, if only it were a bit more cohesive. July picks up the slack though, as “Too Much Rum” (is there such a thing?) speaks clearly and concisely – this lady knows she’s a superstar, has plenty of rum, very few clothes, and she’s ready to have a good time. Correction: she’s already having one, and you’re free to join her or not – but she’s having a good time either way.

August, to my mind, will be the highlight of the 2011 Hot Pirate Babes year. “Fiddler Lass” seems to have it all – pirate music played just for you by a lass with the goods of a bombshell, but a face that maintains its own personality. That her chest is straining her corset to the limits of human comprehension doesn’t hurt either. September’s “Lookout” also features one of the year’s prettier gals, although in this case her calculating eyes make me feel she’s judging me (and I’m not sure I’m faring well in her estimation.) Her outfit appears another of the “almost feasible” sorts, although in this case it, and the lighting, are too dark to make out as much as I’d like.

October’s “Don’t Mess with Me” is far easier to see, featuring a lovely, curly haired piratess that reminds me very much of Madeline Kahn’s “Betty” in the pirate movie Yellowbeard. Cute enough, but I fear she seems to be planning the viewer’s rapid demise, so moving on to November, which is unfortunately the second of 2011’s weakest. This is primarily due to what I believe might be Tiger Lee’s white whale (I’m referring to a concept, and NOT November’s shapely model.) In short, “Fortress Guard” is an example of how Tiger has not yet captured the perfect uniformed hot pirate babe. From my viewpoint, what makes a hot pirate babe work is when there’s a certain level of feasibility, with ladies dressed in a manner that just maybe could be found in a shipboard, tavern, or brothel situation (however unlikely.) But women in uniform jackets, no pants, and bearing muskets in a “who goes there?” fashion – here is where my mind finds a disconnect. Why isn’t she wearing pants? And when did the British Army start to issue crotch cravats to their fortress guards? Perhaps I’m just too literal minded for my own good. But then, I’m not the one who forgot to wear pants to work.

The year then concludes much as it began – with a basic Hot Pirate Babe of the tried&true fashion. December’s “Camp Wench” hails from the blonde bombshell school of hotness, complete with the requisite revealing pirate attire and “come hither” eyes lined heavily in black. She’s a little posey, standing there with weapons that I’m not sure she has any idea how to use, but we’ll forgive her because, you know… hot.

You can order your Hot Pirate Babes Calendar from www.hotpiratebabes.com. If you don’t buy it now, you’ll forget, procrastinate until June, and then you’ll have missed half a year of pirate hotness. So do yourself a favor and place that order now.