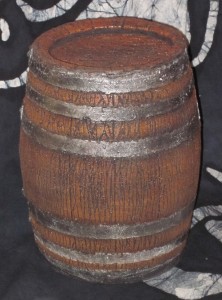 Buy it Now
Let me set a scene for you. You and your mates are at a glorious pirate festival, bedecked in your swashbuckling finery. And then, as so often happens in these dark times, a gaggle of steampunks approach you and ask something like, “Pardon me, good sirs, indubitably, do you happen to know the location of the afternoon tea party, as it were? Harumph, pip pip?”

What exactly is the best response to this dreadful occurrence? Some might opt for the “stab first” option, but this often leads to trouble as it requires violating the festival’s peace-tie policy. Others might instead launch a small barrage of profanity, but in truth a cursing pirate sometimes comes across more like Yosemite Sam than we care to admit, which could leave you vulnerable to heckling (believe me, nothing is more painful than watching a steampunk do his Yosemite Sam impression at your expense). And so I would offer a third, wholly superior option – club the steampunk commander upside the head with a five gallon rum barrel. Pretty sweet, eh?

But wait, before you go and worry that manslaughter with a barrel is only marginally less troublesome than the aforementioned stabbing option, know this – YOUR rum barrel in this case is actually made from a Nerf-like foam rubber, intricately painted to look real in every sense. You smack the steampunk upside his pompous noggin and he dutiful emits a ladylike yelp. But then, upon realizing he’s unharmed, he has no choice but to play the role of the gentlemanly good sport, laughing nervously and saying, “Pip pip jolly good, excelsior.” The two of you share an awkwardly chummy moment, and the steampunk doesn’t even notice as his mistress/maid/jetpack-wearing-librarian runs off with your first mate, or that your cabinboy is pouring tar into the gears of his lunch box.

THAT’S how you deal with steampunks, and it wouldn’t have been possible without a foam barrel from the Sea Critters Collection by Hallow’s Keep Creations. About the size of a breadbox, these barrels look completely real, and yet are as soft and squishy as your favorite teddy bear. Practice “lugging” it around to make it appear heavier than it is, and then enjoy the look of terror in your friends’ eyes as you suddenly launch it at them. Some will laugh as it harmlessly bounces off their chest. Others will carry the grudge forever, but they were never really your friends to begin with.