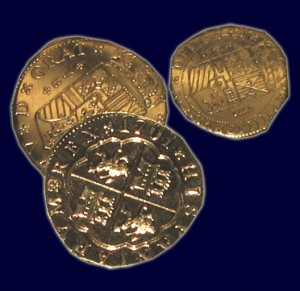 The problem with having a pocketfull of doubloons is twofold:

1) They’re quite rare
and 2) They’re so bloody expensive.

That’s why almost to the pirate, any of us who want to walk around in our finery with a little jingle in our pockets must settle for some sort of replica. Generally these repicas are either cheap-ass plastic (great for giving away to kids, but pretty unconvincing to anyone over six), or the higher quality metal variety. To my knowledge, most all the metal coins on the market are made from a basic soft metal, then coated with the appropriate gold or silver shine. Generally speaking they serve just fine, but now and then you might want something a tad nicer.

Northwest Territorial Mint is new to the doubloon business, but they’ve been making commemorative coins for years. And this experience definitely shows in the new line of Pirate Dubloons – heavy, crisp, and solid through and through. Whats more, they boast two details that are especially rare, in that they’re dated at 1701 (smack in the Golden Age of Piracy, rather than 40 years later as is so common,) and in that they DON’T say “copy” or “replica” anywhere on them (which always spoils the fun just a little.)

The edges of these coins are rough cut, and differ from one coin to the next. The faces, however, are crisp and new looking, as if straight from the mint. They might even be considered a bit too clean, but you can muck them up yourself. And being as their color is natural, rather than plated, no amount of mucking should ruin their historical appearance.

These coins are sold in packs of five (two large, three small). They’re a bit more expensive than other coins on the market, but not nearly as much as you might expect considering their superior quality.

Beautiful work – and sure to turn heads when you drop a handful on the table at Denny’s by way of trying to pay for your post-bar meal.