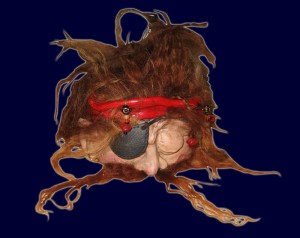 Is this the weirdest item I’ve ever reviewed? Maybe. Wait, there was that one rum that tasted of breakfast sausage…

No, this is weirder.

It’s a pirate head. Well, most of a pirate head. Jawline up. And he appears to be sleeping. No larger than a baseball, his firey red hear spews in all directions. There’s even a braid or two amongst the locks. Reminiscent of a troll doll, he gently slumbers, one eye patched and the other closed. The detailing in his face is exquisite, the same with his bandana and the beads that hang thereof. But what’s this? The top of his head lifts neatly off to reveal…  well, that depends on what you put inside the last time you opened it. Because, in truth, this isn’t a decapitated sleeping pirate, but rather a jewelry box. Or perhaps a curiosity box would be a more apt term. By the way, did I mention that when you open it, his realistic glass eyes are revealed? Well, they are. And they’re creepy.

This item I so dodgingly describe is a Pirate Eyebox from Surpreyes. Each is handcrafted of clay, handpainted, and then completed with hair plundered from a Tibetan lamb (harrr!!!) And if you’ve been asking, “what can I possibly get for the pirate who has everything?” I can pretty much guarantee they don’t have anything quite like this. Seriously, they’re pretty damned cool (and I’m fairly certain it watches me while I sleep.) 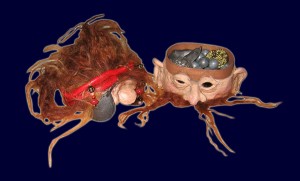