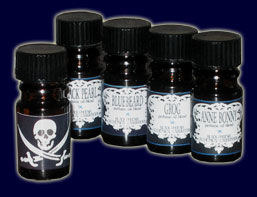 So what does a pirate do if he wishes to emit a manly scent – one that bespeaketh of robust skullduggery, and yet still makes the ladies’ toes curl? That’s where Black Phoenix comes in. Black Phoenix carries an enourmous variety of scented oils, many of them aimed at the graveyard crowd. But if you’re willing to do some digging, as with John Hawkins, there’s treasure to be found. They in fact offer several pirate-specific oils, reviewed here, and also several pirate-friendly oils (with names like Voodoo and Port Royal,) which I’ve not had opportunity to review, but probably smell perfectly piratey as well.

Jolly Roger: Leather, rum, wood – and yet it all adds up to something sweet, but not too much so. The gentleman pirate – refined, but dangerous.

Grog: You don’t need to spend the night drinking rum to smell like you have. “Grog” is the ultimate truth-in-labeling – it smells like rum raisins, and is happy to do so.

Anne Bonney: Who says guys should have all the fun? Spicey, seductive, and sweet. And perfect for the seagoing woman with a penchant for filleting spanish officers.

Bluebeard: Much like Jolly Roger, but less defined and darker. It has a sharpness about it underneath, much like that dagger stashed in your sleeve.

Of course, buying these oils is only half the battle – the real trick is how will you use them? Dab a little on your pulse-points (those are those spots you feel on yer mates ta see if they’re dead), or dollop a tad in your laundry. Or spash a little on a heated surface and let evaporation do the work (Bilgemunky.com and Black Phoenix Alchemy will not be held responsible if you set yourself on fire.) Whatever you do, you (or your quarters) are bound to smell piratey – and that’s what it’s all about 🙂